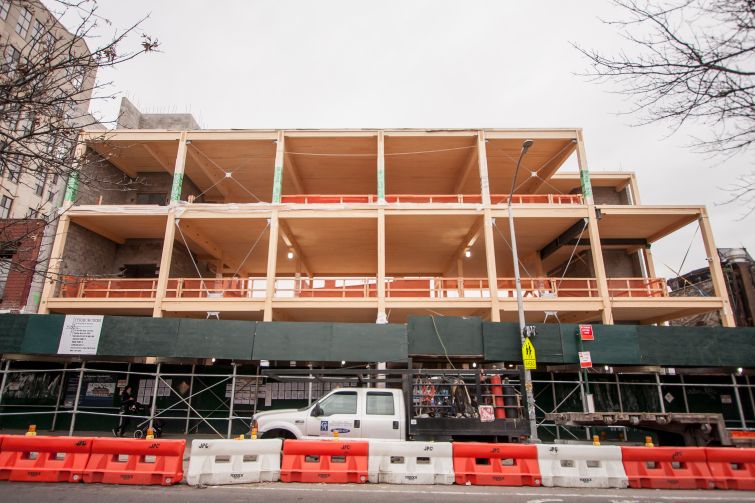 When developer Flank purchased two industrial properties in South Williamsburg, Brooklyn, the firm’s partners decided they wanted to plunge into the North Brooklyn office market with a concept that hadn’t been seen in New York City in nearly a century: newly constructed wooden buildings.

Creative office tenants want brick-and-beam buildings—meaning brick walls and timber framing—that resemble old warehouses and lofts constructed around the turn of the last century. In neighborhoods like Williamsburg and NoMad in Manhattan, tenants are willing to pay higher rents for former industrial spaces than for typical office space, Ken Copeland, a partner at Flank, told Commercial Observer during a property tour.

So Copeland and his partners decided to mesh the authenticity of New York’s manufacturing past with the benefits of new construction. They are developing two new wooden buildings at 320 and 360 Wythe Avenue, rising three and five stories respectively. The projects are being fashioned out of nail-laminated timber, a specially engineered and chemically treated kind of wood that’s both dense and fire-resistant. The timber is mostly made of Canadian black spruce trees and comes from a small town in Quebec called Chibougamau. Montreal-based Nordic Structures manufactured the wood pieces based on Flank’s architectural plans and shipped them down to Brooklyn.

And wood is just as cost-effective as more traditional construction materials.

“It’s pretty much equivalent [to concrete],” Copeland explained. “Obviously the price of concrete has gone up over the course of this building cycle. And [compared to] steel, it’s also pretty equivalent. What we weren’t sure about was how efficient it would be and how fast it would be. But what ended up happening was what we’d hoped. [The laminated wood] actually goes up faster than steel…because everything is prefabricated and fits together.”

Recently, the smaller of the two buildings, 320 Wythe, topped out its timber. The 15,000-square-foot structure will have 11,000 square feet of office space and 4,000 square feet of ground-floor retail, which may be filled by a boutique store or a restaurant. Work is expected to finish in June, and asking rents for the office space will be in the $70s per square foot, Copeland said.

Two blocks south, workers are laying the foundation for 360 Wythe, which will hold 46,000 square feet of office space, 18,000 square feet of retail and 27 apartments. Here, too, the asking rent will be in the $70s per square foot.

Flank is not the first firm to take a stab at timber building in New York City over the past few years. In 2015, SHoP Architects unveiled the design for a 10-story wooden condominium at 475 West 18th Street in Chelsea. But last year, developer Sy Ghassemi axed the project, blaming a downturn in the luxury condo market and city regulations that cap wooden buildings at six stories.

But wooden construction has taken off in other American cities. Hines finished a seven-story, 220,000-square-foot timber office project, known as T3, in Minneapolis last year. It’s currently the tallest wooden building in the U.S., but T3 will soon be surpassed by a 12-story, 90,000-square-foot mixed-use timber building dubbed “Framework” in Portland.