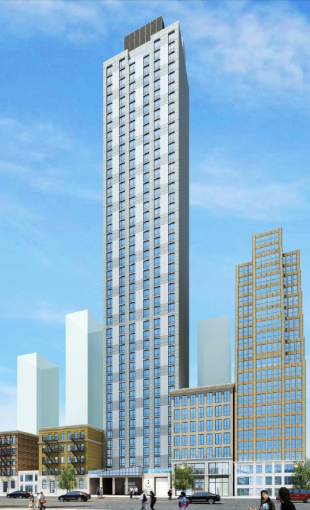 Bank of the Ozarks and Square Mile Capital Management have provided $121.4 million in construction financing to Sam Chang’s McSam Hotel Group for the development of a 45-story, 526-key hotel at 140 West 28th Street, Commercial Observer can first report.

The deal, which closed last week, includes a $97.5 million first mortgage from Bank of the Ozarks and a $23.9 million mezzanine piece from Square Mile, according to information provided by Eastern Consolidated, which brokered the debt.

The 178,000-square-foot hotel is being constructed on a vacant parking lot on West 28th Street between Avenue of the Americas and Seventh Avenues in Chelsea. It is scheduled to open in 2019 and will operate under two separate hotel flags under the Marriott hotel brand: TownePlace Suites and Springhill Suites. The property will have two separate lobbies but shared common areas.

“This is our fourth deal with Sam Chang and Bank of the Ozarks, all on very similar product in the corridor from 28th Street to 40th Streets on the West Side,” Mike Lavipour, a principal at Square Mile, told CO. “Sam Chang, his general contractor Omnibuild and his architect Gene Kaufman are the most prolific hotel builders in New York City. They are able to deliver a product that’s efficient at a per-key basis that is much less than what their competitive set is able to deliver, and much less than hotels are selling for in the open marketplace. On this deal at 75 percent of their cost basis we were in at $230,000 per key—which compares really favorably to sales and refinancings of new product.”

Bank of the Ozarks and Square Mile also financed the construction of McSam Hotel Group properties, including a Doubletree by Hilton at 346 West 40th Street, the Marriott SpringHill Suites at 338 West 36th Street and Hyatt Place Hotel at 350 West 39th Street, which is currently under construction.

“We feel like the basis on these transactions is very well protected at $230,000 a key, relative to the sales in the $400,000 to $500,000 a key range,” Lavipour added. “To be able to make a midteens return for that basis feels like a really good risk-adjusted return.”

“Contrary to market trends, Eastern Consolidated has successfully placed $723 million in hospitality financing in the last 24 months, including $463 million on behalf of the McSam Hotel Group,” Hakim said in prepared remarks. “Sam Chang is a proven sponsor and one of the largest hotel developers in the New York City, having completed the construction of over 70 ground-up hotels. No doubt this new hotel in Chelsea will be just as successful.”

Chang was overseas and unavailable for comment. A spokeswoman for Bank of the Ozarks declined to comment.