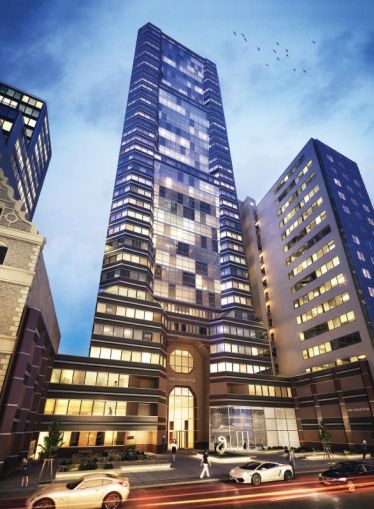 Merchant bank The Raine Group is moving its New York City headquarters to Park Avenue Tower at 65 East 55th Street after agreeing to take more than 33,000 square feet of space at the Midtown office building, Commercial Observer has learned.

The firm agreed to a 15-year, 33,253-square-foot lease last week for the entire 23rd and 24th floors at the 36-story, 620,000-square-foot property located on Park Avenue between East 55th and East 56th Streets, according to sources with knowledge of the deal.

The Raine Group plans to move to its new space next summer from its current digs at SL Green Realty Corp.’s 810 Seventh Avenue between West 52nd and West 53rd Streets, where it presently occupies the entire 17,320-square-foot 39th floor.

Asking rent in the transaction was $135 to $140 per square foot, sources said. Newmark Knight Frank’s Brian Goldman and Matthew Lorberbaum represented the tenant in the deal, while landlord Equity Office was represented in-house by Zach Freeman and Scott Silverstein as well as by NKF’s Brian Waterman, Jared Horowitz, Ben Shapiro, Brent Ozarowski and Lance Korman.

Freeman, the vice president of leasing for the Blackstone Group-owned office landlord, said in a statement that the merchant bank was drawn to Park Avenue Tower’s recently completed renovations, which include a redesigned lobby and outdoor plaza and a new 20,000-square-foot tenant amenity center known as The Club. The amenity center features a fitness center, a recreation area equipped with billiards and Ping-Pong tables, a dining area and conference rooms.

“We are proud to have achieved optimal results for [The Raine Group], maximizing Equity Office’s design/buildout offering at Park Avenue Tower to create a dynamic and collaborative space in direct alignment with Raine’s objectives,” NKF’s Goldman said in a statement.

The Raine Group specializes in the technology, media and telecommunications industries, where it arranges and advises on transactions in addition to pursuing its own investments. The firm advised Japanese telecommunications corporation SoftBank in its $21.6 billion takeover of Sprint in 2013 and former Microsoft executive Steve Ballmer in his $2 billion purchase of the National Basketball Association’s Los Angeles Clippers in 2014, while also investing its own capital in ventures like Vice Media. In addition to its New York headquarters, The Raine Group has offices in San Francisco, Los Angeles, London, Shanghai and Mumbai.