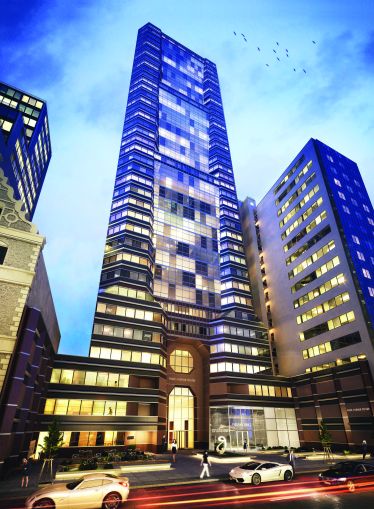 The company, an investment adviser that manages a $4.5 billion portfolio, will occupy the entire 15,048-square-foot 34th floor and an 8,308-square-foot portion of the 35th floor of the 36-story office tower between Park and Madison Avenues.

Landlord Equity Office, an affiliate of Blackstone Group, will build out the space for Cyrus Capital. The design job will include construction of an internal staircase to connect the two floors, and is expected to be completed in the final months of the year.

During construction, Cyrus Capital will move onto the building’s sixth floor. The company will relocate from 399 Park Avenue between East 53rd and East 54th Streets, where it occupies 24,553 square feet on the 39th floor, according to CoStar Group.

“Our capital improvement program has transformed Park Avenue Tower with contemporary design, high-end finishes and modernized systems that distinguish it from other Midtown buildings,” Equity Office’s Zachary Freeman, who handled the deal for the landlord in-house with colleague Scott Silverstein, said in a statement. “Cyrus Capital, which has been a fixture in the Plaza District for years, was drawn to Park Avenue Tower’s reimagined lobby, amenity center with fitness and locker facilities, and the ability to create an office space tailored to its needs.

Equity Office, which spent $750 million to purchase the 615,000-square-foot building at East 55th Street in 2014, coughed up $25 million to renovate it, CO previously reported. The makeover of the building included a redesigned plaza and lobby, and the addition of a fitness center and a recreation lounge.

Cyrus Capital’s new digs near the top floor had an asking rent of $150 per square foot, and the deal is for 15 years, a source with knowledge of the transaction told CO.

“After an extensive two-year search, the combination of efficient floors, boutique feel, stunning views and exclusive amenities made Park Avenue Tower the perfect spot for Cyrus Capital’s next home,” Friedland said in prepared remarks. “The firm has enjoyed a Park Avenue location for many years, first at Lever House, then 399 Park Avenue and now at the reimagined 65 East 55th Street.”