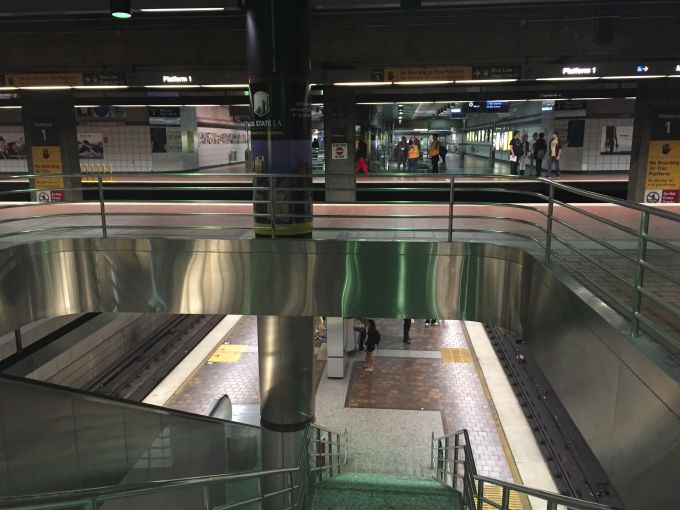 Plans to expand the transit system in car-centric Los Angeles will likely have a positive impact on asking rents and sales of commercial and residential properties, according to data from JLL.

Research focused on the expansion of the Metro’s Purple Line service to connect Downtown Los Angeles with the Mid-Wilshire, Beverly Hills, Century City, Westwood and Brentwood markets when completed in 2026. (Currently, it only travels between Union Station and Wilshire and Western.) The study found that the expansion, which will add nine miles and seven new stations to the line, will impact one of Los Angeles’ most densely populated urban pockets with nearly 19.6 million square feet of office space within a quarter mile of all new Purple Line stops. The augmented service is expected to serve 151,000 residents.

Based on the analysis conducted by Metro, the Purple Line Extension to the Westwood/VA Hospital station will generate about 49,300 daily weekday boardings at the seven new stations. Using a different measure, there will be about 78,000 new daily trips on the full Metro Rail System as a result of opening this line.

“As younger professionals have shown a preference toward using public transit for their work commutes—rather than sitting in bumper-to-bumper rush-hour traffic—the additional seven stops are expected to improve the appeal of businesses to move in and increase commercial development, JLL research indicates.

“Proximity to mass transit is just one piece of a puzzle that is drawing tenant demand and investment into the areas. As investors look to where the next 20 years of growth will be in LA, they look to transit connections. But they also look to where new housing is being developed, and where returns are still viable,” Amber Schiada, a senior vice president and national director for JLL research in the Southwest, told Commercial Observer.

She said Hollywood and Culver City are among such choice locations, with tenants also seeing the value of them as well.

“The new construction has contributed some to the increase in rents, but the increased demand from tenants has also instilled confidence in owners to push rents a little higher as well. These markets are viewed as a value play to Santa Monica and Century City, but still [provide] access to a great talent pool, housing and transit. They are all key ingredients to the rise in pricing there,” she said.

In Hollywood, for instance, office rents have climbed 19.8 percent in the two years because of access to talent, neighborhood amenities and transit, rising to $52.20 per square foot this year from $43.56 in 2015, according to JLL research.

While office vacancy rates in Culver City are up because of a boom in new construction, rents are up more than 20 percent from just two years ago, according to JLL, rising to $42.76 per square foot from $35.40 a foot.

Bert Dezzutti, the senior vice president of the western region for Brookfield Office Properties, said the appeal of properties that are easily accessible to public transit is a trend that will continue nationwide and in Los Angeles, with Downtown Los Angeles, a central hub for the city’s public transit system, particularly well-situated to capitalize on the growing trend.

“It really spans the sector, but where I think it’s vitally important is Los Angeles, which suffers acute transportation challenges,” Dezzutti said. “Anybody that is working here can tell you that the ability to traverse even just the approximate area around the city of Downtown Los Angeles to the West Side, a 20-mile radius, can be incredibly frustrating and challenging and time inefficient.”

Dezzuti said that Downtown Los Angeles, a central hub for the city’s public transit system, is particularly well-situated to capitalize on the growing trend.

“All the facts point to the reality that there has been significant development around these nodes around the actual stations and access points. And that’s both residential, retail and office development,” Dezzuti said.

While he couldn’t point to Brookfield properties developed solely because of transit hubs in Los Angeles, he said the company’s properties downtown, such as FIG@7, a 330,000-square-foot retail shopping center, two office buildings—Ernst and Young Plaza and 777 Tower, totaling 2.2. million square feet—have been advantaged by their proximity to Seventh Street/Metro Center Station. He anticipates the company’s next property, a 64-story residential tower to be erected at 945 W. Eighth near the station, will also benefit from the popular hub.

“That site for our residential project is located immediately catty-corner to the highest pedestrian traffic metro portal,” Dezzutti said. “There is an example of us being advantaged, both from an office occupancy standpoint and certainly the retail has been advantaged by people being able to shop and get on the Metro and move around efficiently. Our residential development will clearly be advantaged. It’s certainly advantaging our ability to continue to develop and be successful to lease it to retail, office and soon residential uses.”

The Metro project broke ground in November 2014 and will be completed in three phrases by 2026. The first phase of the $2.64 billion Purple Line subway extension is nearly complete, with work to start shortly thereafter on the $2.38 billion second phase. Although originally slated for completion in 2035, the future Olympic games in 2028 have fast-tracked the extension, according to Construction Dive.

If the explosion in ridership following the expansion of the Expo Light Rail from Culver City to Santa Monica is any indication, Los Angelenos desire for public transit will only grow. As of this June, the Metro reached its 2030 ridership goal in just about a year, with an estimated 64,164 weekday riders. In comparison, the previous year, ridership was estimated at just 45,876.

“If you look at commercial real estate, the trend in the last 20 to 30 years has been toward more transit-related development because as the city has become increasingly more congested, finding different avenues in which to get people to work or home becomes ever more important, especially in an area like Los Angeles,” Schiada said. “When you look at commercial development near transit or, they tend to have lower vacancy rates and they tend to have higher asking rents so there is a little bit of a premium to be located near those stops,” she added, pointing to the boom in development and asking rents for office space in Culver City following the 6.6-mile route expansion of the Expo Light Rail Line last year.