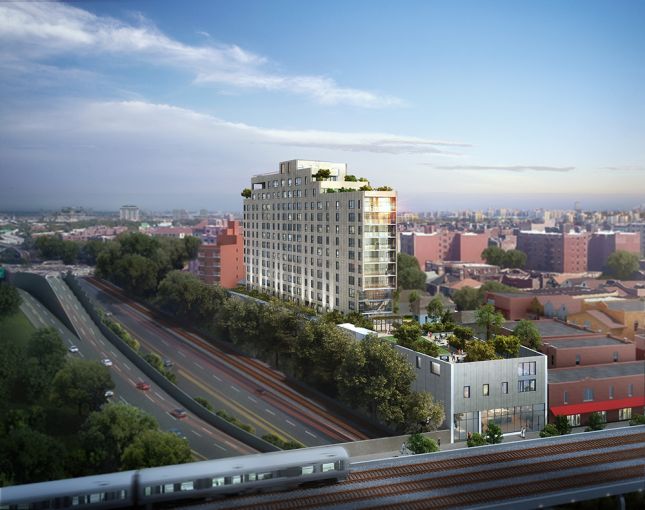 Werber Real Estate has secured a floating-rate, $61.5 million construction loan for a new apartment tower in Jackson Heights, Queens, according to HFF, which brokered the deal.

The floating-rate loan, from Principal Global Investors, will fund the construction of Roosevelt Parc, already underway at 71-17 Roosevelt Avenue. The 15-story building will host 154 rental apartments—ranging from studios to four-bedrooms—and over 16,000 square feet of retail space.

“Unlike Long Island City and Downtown Brooklyn, Jackson Heights has very little competition in the luxury rental segment.” Geoff Goldstein, a senior director at HFF, said. “The building’s got great transportation, and it’s a brand-new building, well designed, with a great developer.”

The brokerage team said they did not have an estimate regarding when construction will be complete.

With perks including a rooftop deck, a fitness center and a movie screening room—40,000 square feet of amenity space in total—the project looks to break ground in the neighborhood in more ways than one. As the looming L train shutdown condemns many Brooklyn residents to the prospect of a hellish commute in the coming years, ongoing improvements to the 7 line promise to make the trip from Jackson Heights to Manhattan a comparative cinch.

“I think that was part of the challenge about this opportunity: it’s a hard project to comp in this submarket given its amenities,” Steven Klein, a managing director at HFF, said. “But because [Werber is] a local operator, they have first-hand knowledge of the submarket, and they know what renters are willing to pay.”

Unlike Long Island City, a sleepy warehouse district in the years before its luxury-housing boom, Jackson Heights is already a bustling residential neighborhood—a trait that could cut both ways for one of the neighborhood’s first high-end developments.

On the one hand, Roosevelt Parc will face little competition for residents seeking high-end digs in the area. On the other, the development could draw ire for boosting rents in a neighborhood whose residents rely on less inflated housing bills.

The neighborhood, famous for its striking ethnic diversity, came to broader attention in 2015 as the subject of the film In Jackson Heights. The documentary, by acclaimed director Frederick Wiseman, highlighted the area’s importance as an affordable, welcoming destination for new immigrants to the U.S.

“Times Square is often called the crossroads of the world, but Mr. Wiseman suggests that that title more rightly belongs to Jackson Heights,” Manohla Dargis wrote in The New York Times.

Representatives from Werber and Principal Global Investors did not respond to requests for comment.