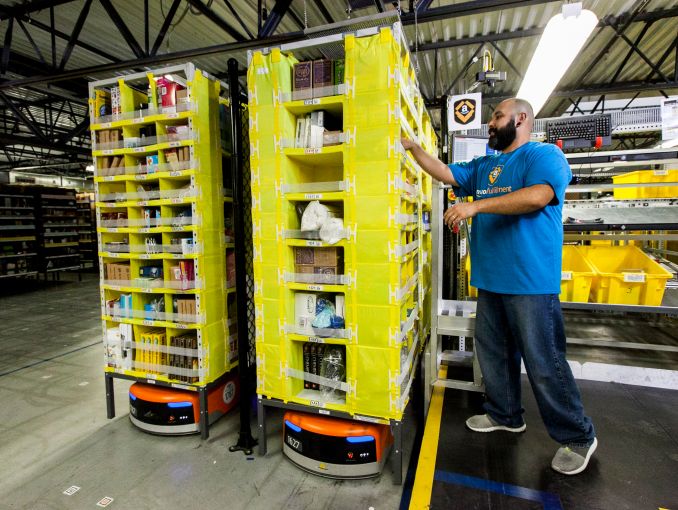 A worker collaborates with a robot carrying a load of goods at an Amazon warehouse. Photo: Getty Images.

In regions across the country, the rise of e-commerce is bringing industrial warehouses to burgeoning prominence in commercial mortgage-backed securities transactions, according to a report from Morningstar Credit Ratings. The report, prepared by analyst Jennifer Jones, notes that in the first half of 2017, logistics and distribution facilities outperformed all other major real estate categories in supply, demand, occupancy and rent growth.

Amazon in particular has grown in importance as a backer of securitized commercial mortgages. As the company continues its nationwide search for a second headquarters, investment banks have wrapped loans tied to seven of the company’s warehouses, totaling nearly $2.1 billion, into outstanding transactions—a development that Morningstar views favorably, given Amazon’s balance-sheet strength.

“With warehouse space, one of the big differences [from office buildings] is that you’ll just have only one or two tenants,” said Edward Dittmer, a senior vice president at Morningstar. “We look through the credit at the underlying tenant. If you’ve got a 10-year lease, the cash flow is going to come from the tenant, [affecting how] the credit is going to perform over time.”

Amazon remains secretive about its logistics network. Publicly, it has stated only that it maintains more than 70 sorting and distribution centers in the U.S., but Morningstar estimates the current number at more than twice that sum. In September, Gov. Andrew Cuomo announced that the company would open its first New York-area fulfillment center, on Staten Island, in 2018.

Despite Amazon’s opacity, however, Morningstar has found compelling evidence for its strength as a tenant.

At one Amazon warehouse that the agency examined, in Charlton, Tenn., employment has grown by 300 percent over the last six years, rising to 1,200 today from 300 in 2011. Other sites, like a fulfillment center in Chattanooga, Tenn., have taken advantage of artificial intelligence to increase productivity: algorithms provide that facility’s 3,000 workers with precise directions for how to navigate the 1-million-square-foot storage building in order to use their time most efficiently.

The internet commerce giant has made a strong push into artificial intelligence in recent years, most notably with its 2012 purchase of robotics firm Kiva Systems for $775 million. Tens of thousands of Kiva robots now ply Amazon’s warehouse floors, according to Business Insider. The robots can traverse the shelves at five miles per hour, hauling 700 pounds of goods at a time.

More broadly, though, the Morningstar analysts said that Amazon’s most transformative effect on CMBS has come from its nationwide push for two-day delivery through its Amazon Prime service, which they said has fundamentally altered the way that warehouses are used.

“Traditional retailers had a network of stores, with a more rigid view of how goods should be distributed,” Dittmer said. “Because of the growth of Amazon and two-day shipping, I think there has to be a more robust logistics network behind that.”

As online retail sales grew 15 percent year-over-year as of early 2017, reaching more than 10 percent of the total in all sectors excluding autos and gasoline, Jones said she is bullish on the permanence of the sector’s import.

“I think that there’s more to come,” Jones said. “It’s a very strong sector. And we’re continuing to watch it evolve.”