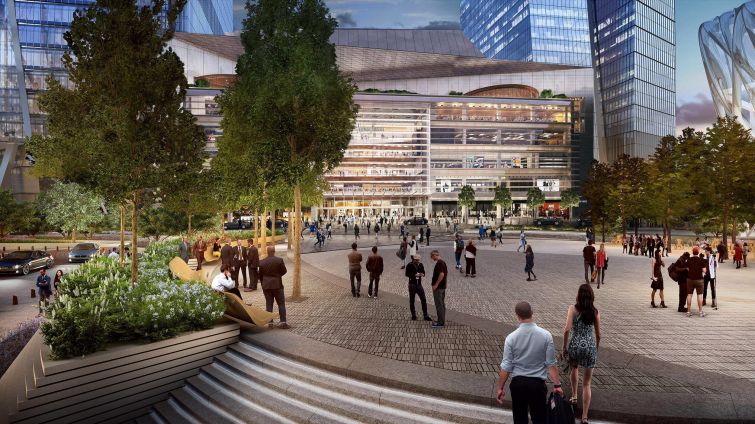 Rhubarb will open a 10,000-square-foot bar, restaurant and events space at the top of 30 Hudson Yards, the 92-story, 2.6-million-square-foot office tower that Hudson Yards developers Related Companies and Oxford Properties Group are building at the corner of 10th Avenue and West 33rd Street, the company announced yesterday.

In addition, the British hospitality group is planning a 5,800-square-foot restaurant on the fifth level of the Shops & Restaurants at Hudson Yards, the seven-story, 1-million-square-foot retail complex anchored by department store Neiman Marcus. The eatery will join dining concepts planned by the likes of renowned restaurateur Thomas Keller, José Andrés and David Chang at the Hudson Yards mall.

The ventures represent Rhubarb’s first endeavor outside the U.K. and are both expected to open in 2019, upon completion of both 30 Hudson Yards and the Shops & Restaurants complex.

“We have been looking to open in New York for several years now and the Hudson Yards development is incomparable,” Rhubarb Chief Executive Officer P.B. Jacobse said in a press release. Jacobse added that the 18-million-square-foot project is “redefining the culinary scene in New York and we simply had to be a part of it.”

Kenneth Himmel, the president and chief executive of Related Urban, Related’s mixed-use development division, said in the release that Rhubarb’s 30 Hudson Yards concept will occupy “what is sure to be one of the most iconic locations in New York,” given that it will be located above the highest outdoor observation deck in New York City.

Himmel and celebrity chef Keller have been responsible for co-curating the culinary mix at Hudson Yards, which Himmel described as “the ideal location for Rhubarb’s first international expansion.”

Asking rents and the lengths of the Rhubarb leases were not disclosed by Rhubarb or Related, and representatives for both firms did not provide additional comment. Kevin Stuessi and Webber Hudson represented the landlord in-house, while it was not immediately clear who handled the deal on behalf of Rhubarb.

The New York Post first reported the news of the Rhubarb concepts at Hudson Yards.

Related also announced yesterday that it had signed luxury jewelry retailers Cartier, Van Cleef & Arpels and Piaget to leases at the Shops & Restaurants at Hudson Yards, bringing the shopping center to more than 70 percent leased. Further details on the transactions were not provided.