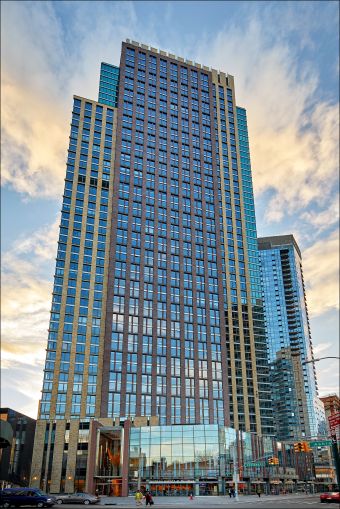 Gotham Organization has pulled in a $218 million refinancing for the Ashland, a rental apartment tower at 250 Ashland Place in Fort Greene, Brooklyn, according to an announcement by Greystone Bassuk, which negotiated the financing.

Wells Fargo is behind the 30-year, fixed-rate loan, which was securitized through Fannie Mae‘s multifamily mortgage-backed securities program. The Actors Fund joins Gotham as an equity partner in the development, according to property records.

Construction on the new 53-story building wrapped up in March. Of the building’s 586 apartments, nearly half are set aside for middle- or low-income residents under the New York City Housing Development Corporation’s 50/30/20 program. That initiative provides tax-free financing and favorable rates—as low as 4 percent—to developers who set aside 30 percent of a building’s units to middle-income tenants and 20 percent to low-income tenants.

The other half of the building is rented at market rate. Market-rate units range from $2,520 a month for a studio apartment to $4,771 for a two-bedroom, according to the building’s website.

“The structure for the original construction financing comprised tax-exempt bonds, which were purchased by a consortium of banks led by Wells Fargo,” Drew Fletcher, the president of Greystone Bassuk, explained. “The [rest of the financing] was a conventional mortgage loan. There was some subordinate financing also provided by the [New York City Housing Development Corporation].”

As of the summer, he said, approximately three-quarters of the Ashland’s units were occupied, with the low- and middle-income residents drawn from an application and lottery process.

The building’s 547,000 square feet include a 17,000-square-foot ground-floor retail space currently leased to Gotham Market, a food hall that hosts eight restaurants. The residential tower has amenities including indoor and outdoor fitness areas, screening venue and several lounges. Residents receive free breakfast on weekday mornings and a complimentary membership to the Brooklyn Academy of Music.

Fletcher emphasized that all tenants, regardless of income status, enjoyed equal access to those perks.

“In New York, the majority of mixed-income multifamily affordable projects have historically been financed with tax-exempt bonds and tax credits through either the Housing Finance Agency or the Housing Development Corporation,” Fletcher said. “When these agencies are involved as the issuers, they generally require that the low income and market rate tenants have equal access to the project amenities.”

As the Ashland rose on a formerly city-owned plot set aside for affordable housing development, Downtown Brooklyn rose around it. Since former Mayor Michael Bloomberg spearheaded the Downtown Brooklyn Plan in 2004, the neighborhood has—in fits and starts—begun to flourish as a retail and entertainment destination.

The area boasts a new Alamo Drafthouse—a dine-in movie theater—and the 60,000-square-foot DeKalb Market food hall, both in City Point. Just across Lafayette Avenue, on the first floor of the new 32-story residential tower at 300 Ashland Place, Apple signed a 10-year lease for its second store in the borough.

“I think this particular submarket is one of the most exciting and vibrant neighborhoods in the area,” Fletcher said.

He added that he expects residential prices to remain especially strong as renters confronting the upcoming L-train shutdown sour on Williamsburg. The Barclays Center station, he noted, is a stop for “nearly every train in the system.”

Representatives from Gotham and Wells Fargo did not respond to requests for comment. The Actors Fund was not immediately available for comment.