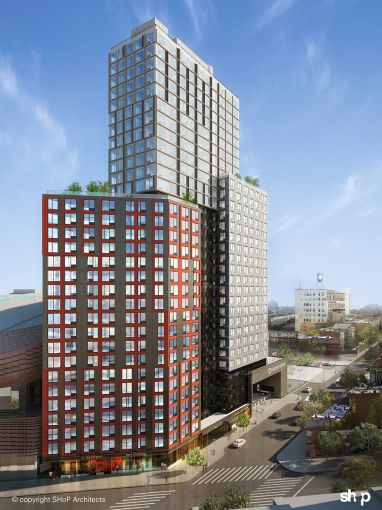 For the last three years, construction workers have been stacking unit on top of unit to create the block-wide, red and gray building that sits just behind the Barclays Center in Downtown Brooklyn. Forest City Ratner Companies’ B2 BKLYN building, which currently stands at 19 stories at 461 Dean Street, is not only meant to be the tallest modular building in the world upon completion, but it will also be structured as a 50/30/20—a development that falls under the mixed-income affordable housing program run by the New York City Housing Development Corporation.

Similar to 80/20 Housing—the city program of tax-exempt financing for developers who make 20 percent of their units affordable—the 50/30/20 Mixed-Income Program combines a 50 percent market-rate component of rental units with a 30 percent block set aside for middle-income families and another 20 percent for lower-income residents, in more emerging neighborhoods.

With increasing land and construction costs across the city driving competition to buy and build projects, developers have had mixed reactions to the 50/30/20 program, especially compared to the 80/20 program, which provides more market-rate units in established neighborhoods. HDC estimates that 15 to 20 developments have been completed under the 50/30/20 structure since the program’s inception in 2003.

“50/30/20 developments have thinner margins and work best in emerging neighborhoods, where market-rate units in fully amenitized buildings can draw slightly higher rents, but where land is still somewhat affordable,” said Meredith Marshall, a managing partner and co-founder of BRP Development. “80/20s are really geared toward established neighborhoods, and where reduced taxes obtained through 421a allow for the creation of some affordable units.”

The New York-based firm has three 50/30/20 developments in its portfolio, including the Crossing at Jamaica Station in Jamaica, Queens.

“There is no doubt that escalating rents and land costs make it more difficult to produce affordable housing, and that a combination of private, state and city resources will be needed to get the job done,” Mr. Marshall said.

He explained that those resources—which include direct subsidies, tax credits, up-zonings and other mechanisms—incentivize private developers and make these developments financially viable.

“Executing a 50/30/20 development is a balancing act between the benefit of market rents—and cross-subsidy provided to low-income units—and the challenge of rising land costs,” Catherine Townsend, the vice president in development at HDC, told Commercial Observer. “We’ve seen a number of developer proposals in areas that contain robust market rents; however, the land basis, again, tests the feasibility of this model.”

The 50/30/20 program started under HDC in 2003, to encourage the development of middle- and mixed-income housing in the city.

A year later, Ron Moelis and Sanford Loewentheil’s L+M Development Partners completed the first project financed under the 50/30/20 program in 2004: The Aspen, a 233-unit building at 1955 First Avenue between East 100th and 101st Streets.

“At the time, there were really no tools for the creation of middle- and mixed-income housing—it was either an 80/20 or low-income housing,” said Lisa Gomez, a partner and chief operating officer at L+M. At the time of the program’s inception, Ms. Gomez was the senior vice president in development at HDC. She joined L+M in 2005.

Before the 50/30/20 program came about, HDC’s New Housing Opportunities Program was meant to address the creation of more affordable or moderate-income housing, she said, noting that not many developments were created under that program.

Ms. Gomez explained that the 50/30/20 program was designed to fill the gap where developers could not make affordable deals work because of pricey land costs. The program was meant to target more up-and-coming neighborhoods, where a developer could find upside.

“When we first created this program, it was a way to bring a more mixed-income approach into neighborhoods that were not quite ‘there’ yet, like Harlem and parts of Brooklyn and Queens,” she said. “I would say it’s pretty difficult to make this happen in the world today because of where land and construction costs are.”

While some developers have made the numbers work, L+M among them, other New York real estate players find the prospect of a 50/30/20 development unrealistic because of how acquisition and development costs are financed.

“It is very difficult to set aside a total of 50 percent for [low- or middle-income] housing … and simultaneously have a viable development, even if land value is zero,” said Gregg Schenker, the president and co-managing partner of ABS Partners Real Estate.

“In order for the [50/30/20] program to work well, substantial additional tax abatements or economic credits are required,” he noted. “[In addition] the 80/20 program has been successful and should be enthusiastically embraced and continued.”

In an 80/20 project, government subsidies come in the form of tax-exempt bonds and tax credit equity for the 20 percent low-income portion of the development, and depending on location, the 421a tax abatement. Funding a 50/30/20, subsidies can come from HDC or New York City Department of Housing Preservation and Development and a second mortgage from HDC or HPD at below market rates. For any units that are designated for tenants earning 60 percent of area median income or below, low-income housing tax credit equity can also be used.

“With 80/20s, it’s pretty black and white,” said Priscilla Almodovar, the head of community development banking at J.P. Morgan Chase. “Banks know how to underwrite the deals, developers know what is expected from them in terms of equity, and the city can provide 421a. With the [50/30/20] mixed-income projects, there is more negotiation between stakeholders. Every deal becomes very bespoke because they are driven by the particular neighborhood, where market-rate rents are in that neighborhood, and what the stakeholder’s view is on the future of that neighborhood.”

A traditional 80/20 project typically has true equity, which is provided by the developer and which will cover roughly 30 to 35 percent of development costs, said Ms. Almodovar. By contrast, a 50/30/20 receives equity from a bank in the form of a low-income housing tax credit.

“Right there, with the equity that is coming in, the investor’s expectations are very different from the expectations of an investor who is there for the upside,” she explained. “A low-income tax credit investor cares that those tax credits are in compliance for 15 years. An investor in an 80/20 is there for the upside—they care about the market-rate rents. It’s a very different dichotomy.”

Susi Yu, the executive vice president of residential development at Forest City, explained that the amount of net operating income is crucial in the underwriting process. She is overseeing the development of Pacific Park (formerly Atlantic Yards) in Brooklyn, Forest City’s joint venture project with China-based Greenland USA.

“If you’re developing an 80/20 project, you have 80 percent market-rate rents that you could actually leverage because you have more income to show when underwriting the project,” she said.
However, Ms. Yu noted that the B2 building was no more challenging to finance than any other affordable project. Bank of New York Mellon originally provided credit enhancements on the bonds that funded the B2 building, but the development is currently being funded through equity after financial and scheduling setbacks, including a leakage problem and a dispute with former partner Skanska.

HOW IT GETS TRICKY

“If you are buying a piece of dirt today, with rising construction costs in this market, it is very difficult to do affordable housing,” Ms. Yu said. “Where you see developers doing mixed-income projects, a lot of those times, the developer already owns a piece of dirt and they go before City Planning and either up-zone the site to add density or remove use restrictions.” Similarly, the project plan for Pacific Park was originally approved in 2006, though construction on B2 began in 2012.

Ms. Yu noted that in some respects, even an 80/20 project could be difficult to underwrite because of the high cost of land and construction. With 50/30/20s, costs are equivalent to developing a conventional rental building, she said.

“Construction costs are currently all over the place, [as] some affordable projects are costing $260,000 per dwelling unit, while others have costs around $320,000 depending on amenities and innovative features,” said Radame Perez, the chief operating officer of Bronx-based affordable housing developer Mastermind.

Even beyond the development and financing process, some real estate players have long-term concerns.

“Private real estate investors financing outer-borough development projects ideally are seeking a 12.5 percent rate of return on investments,” Mr. Perez said. “When looking at the 50/30/20 model, I don’t think there is enough cash flow to compute the kind of return a typical private investor is seeking.”

Mastermind, which currently has 564 affordable units in its portfolio and has a goal of creating 1,500 affordable units by 2023, does not use the 50/30/20 model because of those concerns regarding thin cash flow. While affordable housing is not necessarily meant for an investor or developer looking to make a high return in the short run, not enough income from rent or subsidies could cut into regular operating costs, he noted.

“When we’ve modeled these transactions, the equity returns are high-ish single digits, which is O.K., not stunning, but on a risk-adjusted basis, not too shabby,” said Adam Weinstein, president and CEO of affordable housing not-for-profit Phipps Houses. “Remember, the equity commitment is relatively low, and the absorption risk is less because half of the property is below market. But these are just models.”

Creating affordable housing of any type has become challenging, or rather, expensive. While developing 50/30/20s has its hurdles, there are still ways for developers to maneuver the New York City real estate world to make the program work.

Developing rental housing of any sort is difficult because of rising property and construction costs, which in part are being driven by foreign investment, Ms. Gomez said.

“Obviously we, like any rational developer, would not take on something that doesn’t make financial sense,” she said. “Everybody has to run the numbers for themselves. The fact that the city is instituting mixed-income is a good thing, and I think all these programs tend to be somewhat flexible, which allows people to figure out a combination that works.”

Ms. Yu pointed to the importance of creating social, economic, racial and ethnic diversity when planning a development.

“I really think 50/30/20 is a great model because it covers the swath of social and economic diversity that actually exists in Brooklyn,” she noted. “There is something to be said for the gentry of Brooklyn, where people who have very strong roots in a community are being pushed out because of rising housing costs. To be able to deliver a building that has market-rate, middle-income and low-income reflects the diversity that really exists in Brooklyn.