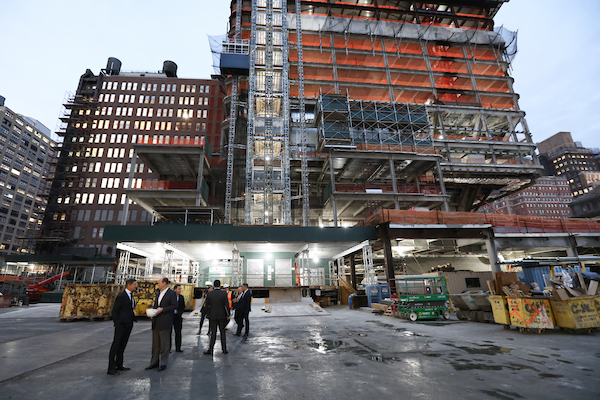 Accounting giant EY, formerly Ernst & Young, has sealed a deal for 600,000 square feet at Brookfield Property Partners’ 1 Manhattan West, where it will house its U.S. headquarters.

EY will take the sixth through 22nd floors at the 67-story, 2.1-million-square-foot office tower currently being built near the corner of Ninth Avenue and West 33rd Street, the firm announced today. EY was in late-stage negotiations for the space as recently as September, as Commercial Observer reported at the time.

The lease will run to May 2037, EY Partner Megan Hobson told CO, with the London-based company slated to move into 1 Manhattan West at an unspecified date after the building’s completion in early 2019. Hobson noted that while EY’s lease on its current New York City office, at RXR Realty and David Werner’s 5 Times Square in Midtown, is due to expire in 2022, the firm has yet to make a decision on whether it will entirely vacate the Times Square location, where it occupies roughly 1 million square feet.

“Having just signed the lease, and [presently] thinking about our footprint in the New York area, it’s going to take us a while to put our plans together,” she said. “We are considering all of our options.”

In separate press releases announcing the deal, both the accounting firm and Gov. Andrew Cuomo’s office described the new lease as an expansion of EY’s presence in the New York metropolitan area.

The governor’s office said the agreement “is anticipated to create up to 1,152 jobs over the next seven years,” with EY’s “expansion” assisted with up to $12 million in performance-based tax credits through the Empire State Development Corporation’s Excelsior Jobs Program. The company, which currently employs roughly 10,000 people in the New York metro region, also plans to open a new, roughly 170,000-square-foot office in Hoboken, N.J., later this year.

“EY continues to grow and expand in serving our clients and our people across the tri-state region,” Richard Jeanneret, EY’s vice chair and northeast region managing partner, said in a statement announcing the deal—adding that 1 Manhattan West’s “convenient location and focus on connectivity and technology” makes the building “a great addition to our metro New York footprint.”

Ric Clark, Brookfield’s chairman and senior managing partner, said in a statement to CO that the company is “thrilled” that EY “chose Manhattan West as the place to build its future in New York.” The landlord was represented in the deal by a Cushman & Wakefield team of Bruce Mosler, Josh Kuriloff, Rob Lowe, Ethan Silverstein and Matthias Li, as well as an in-house Brookfield team of Jeremiah Larkin, Duncan McCuaig and Alex Liscio. Neither Brookfield nor C&W provided the asking rent in the transaction.

“We’re very pleased, along with Brookfield, to welcome EY to 1 Manhattan West,” Mosler said in a statement to CO. The accounting firm will join the likes of law firm Skadden, Arps, Slate, Meagher & Flom, management consulting firm Accenture and the National Hockey League in calling the office tower home.

Neil Goldmacher and Moshe Sukenik of Newmark Knight Frank represented EY in the transaction. An NKF spokesman did not immediately return a request for comment.

Update: This post has been updated to include comments from EY partner Megan Hobson.