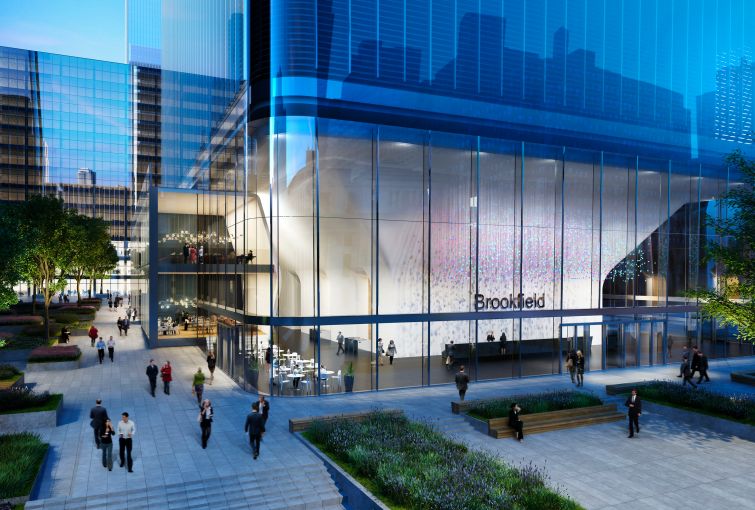 It seems like every week there’s talk of a new company either eyeing or signing a deal to relocate its headquarters to the Far West Side.

This week is no exception. That’s because the National Hockey League has secured a lease at Brookfield Property Partners’ 1 Manhattan West at the corner of 10th Avenue and West 33rd Street.

The NHL, the first professional sports league to depart from the traditional borders of Midtown, will occupy 160,000 square feet across five floors of the 2.1-million-square-foot tower, according to a press release from the landlord. It will also open a 15,000-square-foot store within the 250,000-square-foot retail complex that Brookfield plans for the site.

“The NHL is excited and pleased to be one of the initial tenants at Manhattan West, locating our U.S. headquarters to the ‘new’ West Side,” NHL Commissioner Gary Bettman said in prepared remarks. “The growth and momentum of our game and our business require a state-of-the-art facility; with its terrific amenities, including an NHL store, our new building will be that—and more. Our staff, guests and fans will have a special connection to Manhattan West and the NHL.”

Neither the asking rent nor the length of the lease was immediately available. The NHL is slated to move into the 67-story tower when it is completed in 2019.

The hockey league is the second major tenant Brookfield has signed to the under-development building—the first of two ground-up office towers it plans for the site. In April 2015, the landlord signed Skadden, Arps, Slate, Meagher & Flom via a whopping 500,000-square-foot lease to anchor the property.

“Manhattan West will be a vibrant and distinctive community, and we are thrilled that the NHL will be a part of it,” Ric Clark, the senior managing partner and chairman of Brookfield, said in a statement. “The leadership and employees of the NHL will benefit not only from the modern features and prime location of [1] Manhattan West, but also the unparalleled mix of retail and dining amenities and the beautiful public plaza that will be central to Manhattan West.”

The NHL will depart 1185 Avenue of the Americas between West 46th and West 47th Streets, where CoStar Group indicates it leases 139,346 square feet. That includes an experiential store on the ground floor, which opened in 2007.