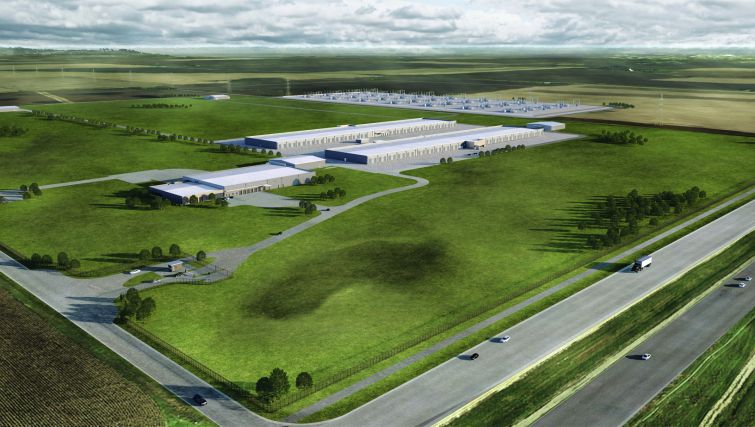 When Apple Inc. picked a Des Moines, Iowa, suburb for its next high-end data center over the summer, only its sixth in the U.S., it wasn’t playing its typical tech-industry-pioneer role. It was following Google, Microsoft and Facebook, all of which have already planted data-center flags in the Hawkeye state.

It’s somewhat surprising, but rapidly getting less so, to see technology giants of Silicon Valley or Seattle turning from industry power hubs on the coasts to second-tier markets to establish new data centers. States like Iowa, Ohio, Nevada and North Carolina have steadily built their infrastructure and business cases, and industry watchers say they have gained momentum amid surging demand for digital storage space and shifting corporate data management trends that might just blow the barn doors off.

Many factors contribute to the wider geographic play, but big data center operators such as Amazon, IBM, Google and SalesForce are hungry for core ingredients of land, power and water, which can be plentiful and cheaper off the coasts, according to Sean Brady, a managing director and co-founder of the global data center advisory group at Cushman & Wakefield.

“They’re going to go for a campus,” Brady said. “They’re typically going to buy a tract of land and build it.”

The main players are tech or software companies adding capacity for their own storage needs, such as Apple and Facebook; cloud computing giants and co-location providers running data for others, like IBM’s SoftLayer and Microsoft’s Azure; and some—Amazon, for one—operating in multiple camps. While today’s push has a cloud-computing flavor, the whole market is hot, Brady said.

“The cloud providers are going into these remote areas and taking down 100-acre tracts of land and 100 megawatts of power,” he said. “The appetite for data is going to absolutely grow exponentially.”

“The scale of what we’re building is unprecedented,” he said.

The heart of data-center country remains on the coasts with the Washington, D.C., and Northern Virginia region still a key hub, thanks to an established co-location industry, and core pockets around Silicon Valley and New York, said Mason Mularoni, a senior research analyst in the professional development industries unit at JLL. Dallas and Chicago are also major markets.

“They still are major contenders—a lot of those are operating on very slim vacancies,” Mularoni said. “But other traditionally midtier markets have made some big expansions forward.”

Iowa’s ascendance started a decade ago when Google made plans to build a huge complex in Council Bluffs, Iowa, in the western part of the state, right around the time state officials introduced tax and business incentives similar to what manufacturing firms had long received, according to Tina Hoffman, the marketing director at the Iowa Economic Development Authority. The state also aided in the development of an advanced fiber cable network, which has helped spark data center projects in the Des Moines area, and even touts itself as a haven from hurricanes or earthquakes, she added.

“We do also have affordable electricity and available water, and we lead the nation in renewable energy access, which was significant for Facebook and Apple,” Hoffman said.

Those seeds bore fruit in billion-dollar complexes for Google and Microsoft, and now Apple is next with plans for a new $1.3 billion 2,000-acre campus in Waukee, Iowa, on which it is starting with two 400,000-square-foot data centers to serve domestic users of its Siri service, its App Store and more. Construction and land account for more than half of the current budget with hardware and equipment as most of the rest. The facility—breaking ground next year with the first center online in 2020—will run on 100 percent renewable energy.

Apple’s facility will have “the latest and greatest in terms of various technologies, especially around energy and efficiency,” said Rachel Wolf Tulley, an Apple spokeswoman. It is getting more than $200 million in incentives from state and local entities.

Ohio is gunning for data center facilities with its own pitch of “safe and central”—free of most natural disasters and a day’s drive to major Midwest and East Coast markets—and a strong fiber network, said Ted Griffith, a managing director for information technology at JobsOhio, a nonprofit economic development group. The state hosts various data centers for non-tech corporations, such as Citibank, won a center for Amazon Web Services in 2014 and recently landed Facebook, which is investing $750 million in a new complex, he said.

“Ohio is in the center, and in terms of access, your speed and distance matters,” Griffith said. “If you are far from the server, there is data latency—[a lag in] the time to travel from point to point.”

The state also has its share of large co-location data providers such as CyrusOne and Cologix that offer services to corporations, which are increasingly outsourcing data management, he added.

Establishing data centers in remote locations alone is not a new trend: Operators in the past often aimed to hide these massive complexes from potential security threats, Brady said. Today, there are different drivers for the trend, however, as many factors align well with the rising popularity of the less traditional states.

“They’re going to states that have cheap power, that have large tracts of land and access to water for cooling systems,” he said, with rural Oregon and Washington State also competing in such searches. “When you build large data centers and you’re bringing in 25 megawatts or more of power to a particular location; that’s a sunk cost.”

“That is a huge siting consideration—trying to make sure these big center operators have multiple pathways of fiber going in and out, and with redundant rings encircling the entire campus,” Martin said.

Demographic factors also are at play when tech firms look at new markets with higher education centers such as Northern Virginia and Ohio, or younger, more affordable cities such as Denver, offering an edge.

“It’s about the workforce that you need—and is it [in a particular market] and at what price,” said Kenneth McCarthy, a principal economist and senior managing director at Cushman & Wakefield.

“The second-tier markets are picking up that capacity,” he said. “The cloud front has driven a significant amount of the absorption in the U.S. the last 12 months.”

It doesn’t hurt that all states are offering generous incentive packages, according to McCarthy. “It’s definitely part of the entire negotiating process now,” he said.

Another development wave may soon spread even further as the “internet of things”—which controls everything from smart refrigerators to self-driving cars—drives demand for multiple smaller data centers closer to end users that can quickly and accurately process the vast volume of information these technologies need to function safely and properly, Brady said. The demand for such faster, real-time data flow will likely spur development of many smaller centers around population hubs, he said. (See story on self-driving cars on page 24.)

“There has been more change in the technology of data centers in the past five years than there has been in 20,” he said. “We are able to cool a greater amount of heat in a smaller space, and so we’re able to run these things more efficiently.”

Fifteen years ago, data centers brought in two to three kilowatts of power to get one kilowatt out, and now it’s much closer to one to one. “The equipment keeps getting better, the designs get better and costs are coming down across the board,” Kaplan said.

Power generation and cooling system trends move fast as data center operators are always on the hunt for even more energy efficiency and cost savings, said Ben Rasmussen, a senior mechanical engineer in AECOM’s mission critical group. Chiller plants and cooling systems are big capital expenditures, and not having them online all day can significantly reduce power use, he said.

“A lot of the clients we work with…are moving away from chilled water-based cooling solutions to direct evaporative-cooled air-economizing solutions,” Rasmussen said.

Another energy systems trend now gaining attention from data center developers is finding ways to use less uninterruptible battery power for backup needs, said Matt Treat, a vice president for the mission critical and advanced technologies practice at AECOM. “One of the newer technologies that we’re seeing the last two years is natural gas-based emergency power generation,” he said.

Natural gas facility manufacturers have made big advancements in recent years, bringing plant startup times down from 10 minutes in past decades to as little as 40 seconds today, making them a viable source of backup power supply, AECOM’s Martin said.

Systems redundancy also remains a big design focus of data centers—a concept that isn’t new but is getting far more sophisticated in implementation as efforts today aim to build multiple pathways for a utility’s output to flow to and from source and usage points  instead of adding or reducing equipment, Rasmussen said.

In some cases, redundancy simply means a standalone piece of a larger campus separated physically from other facilities to reduce common points of failure, Martin said. There are competing views on how to execute such ideas. Some create fully isolated blocks, and others simply have multiple utility sources connected to multiple facilities but with enough flexibility to dedicate supply to specific zones as needed. And most of the manufacturers of power supply equipment—generators, air handlers and more—now build their systems for redundancy purposes, he added.

With technology evolving quickly, many data center operators are planning new campuses strategically. “Most of the large clients in particular making significant capital investments [are] requesting a phased approach to the facility design and installation,” Treat said.

“It’s not your FitBit anymore” driving on-the-spot data-processing trends, Griffith said. “Entire factories are going to operate or not based on the quality of the sensors gathering data. This whole digital ecosystem is just exploding.”