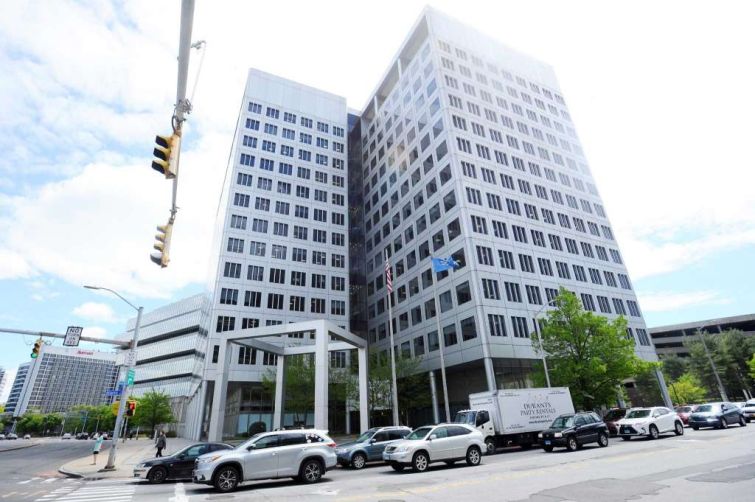 When the mortgage refinancing 400 Atlantic Street, in Stamford, Conn., was packaged into the Goldman Sachs-sponsored GSMS 2007-GG10 CMBS deal in March 2007, there were no particular red flags. Representing a modest 3.5 percent of the deal’s initial balance, the loan was secured by what looked at the time to be a thriving office tower. Ninety-seven percent of the building was leased, to tenants like UBS, American Express, and International Paper. Stamford was a bustling financial center. And the leader of the borrowers’ group was Alan Landis, founder of the Landis Group and a co-owner of the New York Yankees.

In the years since, however, fate has not been kind.

Nearly five months into the $265 million loan’s second trip to special servicing, the building’s second-largest tenant, Charter Communications, announced on Tuesday it would vacate its 110,000 square feet in the building, wiping out more than 20 percent of the building’s occupancy. UBS, which has gradually decamped from Stamford over several years, will finish vacating its 50 percent of the building next year. And International Paper and American Express, which together recently took up over 30 percent of the tower’s space, have also moved out.

Those departures have left the building—whose owners had never missed a loan payment before the recent maturity default—in dire straits. At securitization, the building was valued at $335 million, but a 2016 appraisal cut that number by 60 percent, to only $134 million.

By its own account, the Landis Group’s attempts to restructure the building’s debt with the special servicer, C-III, have not gone smoothly. In a statement sent to CO, a Landis representative said that the group has been trying to negotiate an exit plan with its servicers for three years, but that C-III, along with master servicer Wells Fargo, have passed on “multiple opportunities to agree to various proposals initiated by the owner to restructure the loan at amounts that were each higher” than the building’s latest valuations.

Landis believes that the loan’s servicers are suppressing independent appraisals they have obtained, because the assessments reflect amounts lower than Landis’ offer to settle the debt, the representative said.

Landis declined to elaborate on this contention. Wells Fargo referred questions about the loan to C-III, which did not respond to requests for comment.

The Stamford office tower’s struggles have rippled into headaches for the investors in the remaining tranches of GSMS 2007-GG10. The transaction is now more than 90 percent paid down, but the 400 Atlantic loan—the single largest still outstanding—now represents 35 percent of the principal balance and thirteen of the transaction’s other 20 loans are also in special servicing. In early September, Moody’s downgraded its rating on the transaction’s remaining subordinate class to C—and that was before Charter announced it would be moving out.

“We have a very large expected loss, 18.2 percent, on the original pool balance,” Moody’s analyst Wesley Flamer-Binion told CO, “and this loan is contributing to that.” He described the markdown as “huge.”

Analysts had long viewed 2017 as a significant roadblock for legacy CMBS deals, as the so-called maturity wall of 10-year debt originated in 2007 came due.

But if many struggling vintage CMBS loans appear the height of folly in retrospect, 400 Atlantic is not one of them. With strong tenancy, a solvent, high-profile borrower, and a reasonable initial loan-to-value ratio below 80 percent, the loan showed none of the troubling hallmarks at signing that marked other loans of the period even before the ink was dry.

“Only seers might have known,” that the 2010s would bring a “back-to-downtown” migration among financial services companies and other big office tenants, Manus Clancy, a senior managing director at Trepp, told CO. That trend has damned suburban business centers like Stamford over the past decade, complicating their efforts to keep major office tenants like UBS.

Several other commercial loans in the city have run into delinquency trouble, and Royal Bank of Scotland, once a major financial player in the city, has laid off more than 600 workers at its U.S. headquarters in Stamford since the start of 2015.

UBS’ “thought was, ‘we’re not attracting the kind of talent we need.’ And people need to get out of high-cost states” like Connecticut, Clancy said. “You see it to some degree outside of Boston, too. People want to be near Northwestern, MIT, or Downtown Manhattan.”

Charter, on the other hand, is only moving across town, to a site called Gateway Harbor, near where the Rippowam River flows into the Long Island Sound. The telecommunications company will reportedly spend $100 million developing its new headquarters—with state of Connecticut kicking in a $20 million incentives package.