Morningstar’s Lea Overby on the ABCs of CMBS 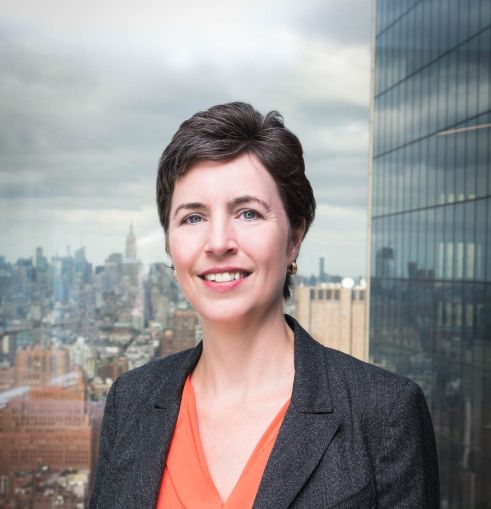 It’s been a busy year for commercial mortgage-backed securities. The wall of maturities may be behind us now, but there’s plenty of new issuance to keep those in the sector busy, including Lea Overby. Overby joined Morningstar Credit Ratings last August and was appointed head of CMBS research and analytics in June. In her new role, Overby is responsible for the ongoing management and development of the rating agency’s CMBS business, including new issue and surveillance ratings, research and analytical products. Overby may have fallen into CMBS “somewhat randomly,” by her own account, but she already has 15 years of experience under her belt. Before Morningstar, Overby was the head of CMBS and asset-backed securities (ABS) research at Nomura Securities and, before that, a CMBS portfolio manager for BNY Mellon Treasury.

Commercial Observer: Tell us about your new role.

Lea Overby: Well, I have two groups that report up to me now. We’re branding one group as research—it’s client focused and produces a for-sale product for the investor community. That team is 15 people. The other piece is the rating agency business, which has two parts: the new issuance business and the surveillance piece of it, which surveils things we’ve already put a rating on.

Will you be adding to your teams?

I certainly hope so. The deal flow has been so heavy that we need to staff up a bit.

How did you get into CMBS?

Somewhat randomly, to be perfectly frank. I did graduate work out of Vanderbilt [University] with this idea that I wanted to teach, and after teaching for a couple of years I realized I didn’t. I took a job at Bank of America Securities and pitched myself as someone who knew how to program—which was not entirely true. This was back in the days when you were able to fake being able to program. I realized, fairly quickly, that wasn’t for me either, and then an opening on the CMBS desk popped up [in 2000]. They were looking for a database person to develop queries and write reports. I got started there, and I loved it.

What appealed to you about CMBS?

My major is math, and CMBS is a nice combination of the qualitative and the quantitative. You can create a model that projects out default rates and prepayment rates that can be fairly accurate on the aggregate, however CMBS loans—each and every one of them—have unique characteristics that can make them fall off the model. It’s a mix of my analytical skills, and at the same time, there’s always a judgmental component to it.

As my career has developed, I’ve found there is an interesting dichotomy with commercial real estate being fixed assets in an ever-changing world. So, as our preferences for urban versus suburban living change, or online versus brick-and-mortar retail or even fashions change, the tenants in these locations also change while the structures themselves don’t. It’s fascinating to me how landlords and developers and tenants work together to figure out how commercial real estate works best.

There seem to have been a lot of hotel special servicing transfers lately.

Hotels are always volatile because the rents reset every single night. If there is any change in the local economy, it is immediately reflected in the hotel market. We see it all the time—hotel developers look at the market, they all decide, “Oh, look, we’re undersupplied,” and start building. Then there’s oversupply. There’s this constant cycle of build, overbuild, stop, reassess and invariably something will happen that will trigger a hotel to be transferred. The default rates on hotels are higher, the loss severity on hotels are higher, and it’s a difficult asset class.

Is retail still experiencing the most pain as an asset class?

Yes, but we’re also seeing a decent amount of office stress. The office story flies under the radar, but I remember when I was buying bonds in early 2007 it was pitched as credit-positive if the main tenant had a lease that rolled near maturity of the loan—with the idea that in 10 years’ time you’d be able to up the tenant’s rent by X percent, making the loan an easy refi story. Which sounded great in 2007—when everything sounded great—but now that we’re in 2017, a lot of those tenants that were surefire “gonna stay” aren’t. We see a lot of office buildings where a tenant that took 50 percent and has decided to downsize or relocate or gone bankrupt and doesn’t need the same amount of space that it did 10 years ago. That’s decidedly a problem.

What was your experience through the crisis?

I bought bonds for a number of years through the credit crisis. That in and of itself was a fascinating experience, and I’m glad to have done it. When the market eased up, I realized I needed a little more of a challenge, and so I started at Nomura in 2010 to head up their CMBS and ABS research platform. I was at Nomura for six years until it closed down its CMBS and ABS trading desk.

Why did the move to Morningstar appeal?

I was looking for a place where I could continue to contribute to a research effort with my knowledge of CMBS but step away from a constant publishing regimen, which I found too restrictive. I joined Morningstar because working at a rating agency, from a researcher’s perspective, is a really great fit. You’ve got the resources you need to come up with great ideas, and you also have the flexibility to write whatever you want.

What was your biggest lesson from the crisis?

I think one of the things that I learned from it is that there are many more connections than you think. To say that a crisis is “contained” is foolish. There is no such thing as containment in this day and age. There are way too many links between nations and banks and financial institutions and the system is way too complex to be able to get a handle on what the fallout may or may not be. It bothers me when people start talking about containment because I don’t think that is something that can be properly defined.

But underwriting and loan origination standards have improved?

Definitely. The loans that were being securitized in CMBS [during the boom] were built on some very aggressive assumptions for continued growth, and at the time I don’t think any of us realized how aggressive those assumptions were. It didn’t take long after the wheels came off to see that they weren’t attainable. It’s interesting now, looking at some of the loans that are maturing—they never hit those projections. It’s been 10 years, and they’re still falling short.

I was as guilty as anyone else was at the time. I can remember looking at loans and saying “Okay, yes this is aggressive, but I think over the next two years the economy will be stable and they can hit these projections.” I applied that exact logic in 2007 and quite obviously I was wrong.

No. But now, things are underwritten pretty much to how they’ve been performing historically. We see some upside but there’s nowhere near the level of pro forma aggressive underwriting that we saw back then.

Would you say that we’re in a healthy real estate market right now?

I think so. There are indications with certain property types that the cycle has started to turn in the wrong direction. The underwriting we’re seeing is still strong, but there is certainly this sense that even projecting that cash flows are going to stay flat might be a little more aggressive than it should be. It’s always a problem when you’re near the top of the cycle: You can feel it shift, but there are some indications that if it does shift it may be a shallow downturn. It’s hard to say.

Has issuance volume been what you expected?

I’ve been pleasantly surprised by how strong it is. I had concerns about the second half of this year, particularly about transaction volume, because there is considerably less that has to get refinanced. But there is every indication that we’re doing fine.

What’s driving the pipeline of deals?

The economy is still strong. There is still money to put to work, there’s foreign capital coming into the country, and there are still deals to be done. A lot of the deals we see are these large single asset-single borrower deals. That money is less prone to taking a breather than the guy who’s looking to buy a $50 million shopping center.

Why is the CMBS market the right place for these huge single assets?

If a loan gets large enough, the CMBS market is a more efficient way to move risk. That’s the long and short of it: CMBS is designed to transfer risk and for large assets in particular it makes sense to chop up that risk and transfer it as appropriate.

What trends are you seeing?