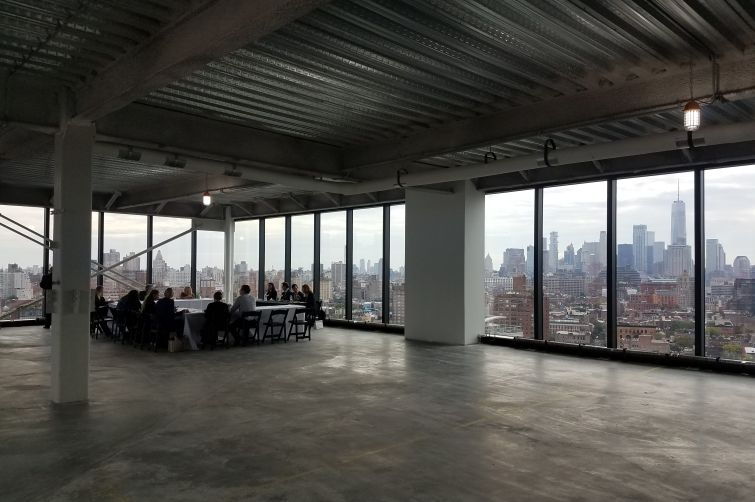 At a media briefing discussing the figures, Nicole LaRusso, CBRE’s director of research and analytics for the tri-state region, cited strong employment growth figures in New York City. That she said “has really been fueling a lot of this [leasing] activity” in the Manhattan office market.

The property, which is still under construction as workers continue to build out the interiors, served as an ideal setting for a discussion on the state of the Meatpacking District and Hudson Square office market. According to the brokers, the area has changed “drastically” as larger, more mature companies view it as an increasingly viable office destination.

King said that the West Side neighborhood’s culinary and cultural amenities are among the reasons “why people want to be here”—pointing to Shake Shack’s recent 27,000-square-foot deal for its new headquarters and flagship restaurant at 225 Varick Street in Hudson Square, as well as institutions like the Whitney Museum of American Art, which moved to the Meatpacking District in 2015.

Amrich noted that more than ever, companies are using their real estate as a tool to recruit new, young talent—a trend that has extended from tech, media and creative firms into the realm of financial services and insurance companies. He cited insurer Argo Group, which inked a 48,000-square-foot lease at Rockpoint and Highgate’s Meatpacking project earlier this year, as well as Aetna’s recent agreement for 150,000 square feet at nearby 61 Ninth Avenue, developed by Vornado Realty Trust.

As far as Manhattan leasing activity on a submarket-by-submarket basis, CBRE said the Midtown market saw 4.84 million square feet of leasing in the third quarter, which constituted a 19 percent increase on the five-year average. Asking rents in Midtown stood at $80.54 per square foot, flat from the previous quarter but down 1 percent from the same period last year.

Midtown South registered 1.14 million square feet of activity—down 8.8 percent below the five-year average for the supply-constrained market and fueled mostly by deals smaller than 25,000 square feet, which constituted 59 percent of all transactions in the submarket last quarter. Midtown South asking rents of $71.90 per square foot—which LaRusso noted have run up dramatically over the past decade from their range in the low $40s per square foot in 2009—are flat from the previous quarter but up 4 percent year-over-year.

Downtown, 1.43 million square feet of leasing activity in the third quarter was 9 percent over the five-year average, with government tenants—such as the city agencies that have flocked to the Verizon Building at 375 Pearl Street—accounting for 30 percent of all activity in the quarter. The submarket continues to see tenant migration trends work in its favor, with 1.5 million square feet of space in the year-to-date period comprising tenants who have moved Downtown from elsewhere in the city. Downtown asking rents were up 1 percent from the previous quarter, to $61.95 per square foot.