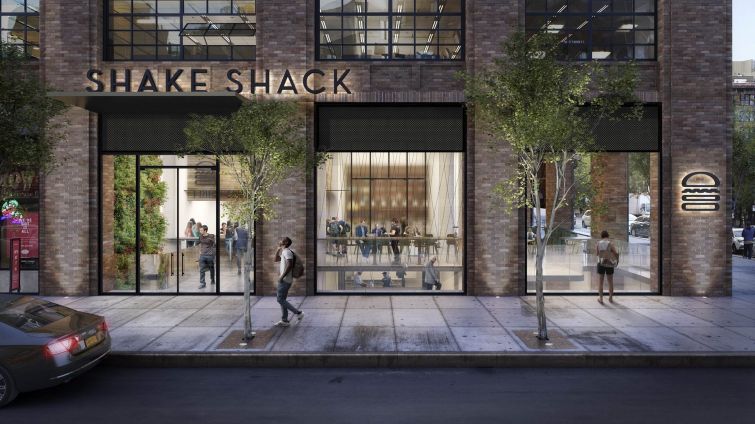 A rendering of the new Shake Shack at 225 Varick Street.

How about a new office with those fries?

Burgers, fries and shakes joint Shake Shack has signed a 27,000-square-foot lease for a new headquarters and flagship restaurant at 225 Varick Street in the West Village, according to a news release from Cushman & Wakefield.

The new digs at the building between Clarkson and West Houston Streets will feature a test kitchen, according to the release. A C&W spokeswoman declined to disclose the asking rent in the 15-year deal.

Shake Shack’s test kitchen and a training center will be in the lower level, the restaurant will occupy a portion of the ground floor and the offices will be on part of the third floor. It plans to relocate its headquarters from its current 10,066-square-foot digs at 24 Union Square East between East 15th and East 16th Streets in spring 2018. The new restaurant will open in mid-2018.

“Shake Shack selected a high-visibility, flexible, moderately priced location and space, with an innovative and talented ownership team to grow its global business,” Mark Weiss of C&W, who represented Shake Shack, said in a prepared statement.

A CBRE team led by Paul Amrich handled the deal for Trinity Hudson Holdings, the landlord of the property. A spokeswoman for CBRE didn’t not immediately return a request for comment.

The first Shake Shack opened as a permanent kiosk in Madison Square Park in 2004. Today there are 134 Shake Shacks around the world, 75 of which are company-owned and 59 that are licensed, according to the company’s second-quarter earnings report made public in August.

The burger chain became a public company in January 2015 with founder Danny Meyer as its chairman of its board.  The company’s stock price is currently around $32, higher than its initial public offering price of $21 per stock. Revenue in the second quarter of 2017 surged 37.4 percent to $91.3 million, compared with the same three months last year when it was $66.5 million.

At the 376,749-square-foot building at 225 Varick Street, Shake Shack will join existing office tenants such as the National Audubon Society and Workman Publishing.