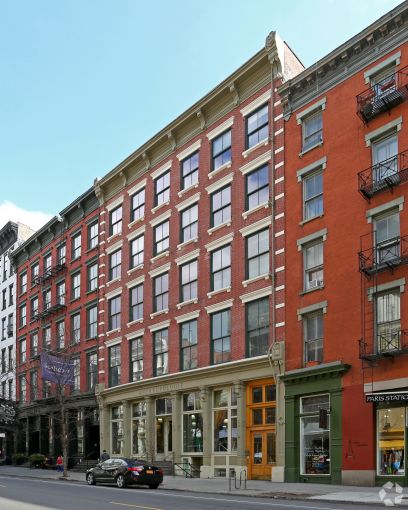 Gucci agreed to a two-year deal with an option to extend its lease long-term at the location between Broome and Spring Streets, according to The Real Deal, which reported news of the deal today.

The space, which was previously occupied by Anthropologie until the clothing retailer shuttered its store last year, is housed at the base of a five-story, 79,000-square-foot office-and-retail building owned by landlord Pearlmark Real Estate Partners. Chicago-based Pearlmark acquired the property, also known as 63 Wooster Street, for nearly $119 million in 2014.

An RKF team of Robert Cohen, Beth Rosen and Jackie Totolo were marketing the space on behalf of the landlord at an asking rent of $400 per square foot, according to marketing materials cited by TRD. Representatives for RKF did not return a request for comment. Broker Robin Zendell of Robin Zendell LLC, who represented Gucci in the transaction, declined to comment.

The block-through retail location features 47 feet of West Broadway frontage and another 38 feet of frontage on Wooster Street, the RKF marketing materials indicate. In addition to the 10,700 square feet of street-level space, the brokerage was marketing 9,300 square feet of lower-level space at the property—though it is unclear whether Gucci is taking part or all of that below-grade space under the terms of its lease.

The Italian luxury brand’s flagship New York City retail location is at the base of Trump Tower at 725 Fifth Avenue.