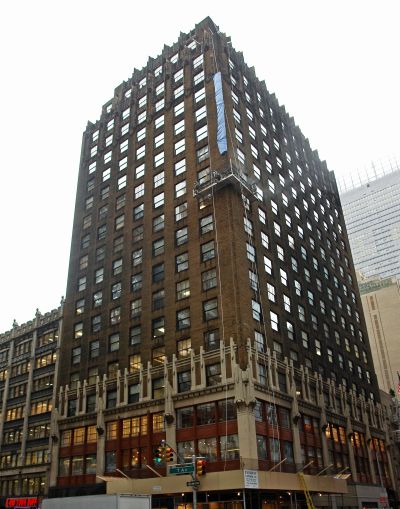 After gobbling up loads of space in the tech-heavy Midtown South market, startup office provider Knotel is setting its sights on Midtown. The company has signed a 26,340-square-foot lease for three full floors at 9 Times Square, also known as 570 Seventh Avenue and 200 West 41st Street.

Knotel agreed to a 10-year deal earlier this month for the entire fifth, seventh and ninth floors at the 21-story, 170,000-square-foot prewar office building on the southeast corner of Seventh Avenue and West 41st Street. CoStar Group first reported news of the lease last week.

Knotel, which provides short-term and rolling lease agreements to businesses that effectively sublease their space, has already agreed to sublease an entire 8,780-square-foot floor at the property to Hamburg, Germany-based publisher Bauer Media, a Knotel spokeswoman told Commercial Observer. Knotel has already taken possession of two of the floors at 9 Times Square—one of which will house Bauer Media’s offices—and expects to take occupancy of the remaining floor “by the middle of 2018,” the spokeswoman added.

Asking rent in the Knotel deal was between $56 and $58 per square foot, though neither CoStar nor sources with knowledge of the transaction disclosed the length of the lease. Gabriel Marans, John Mambrino and Jordan Weiss of Savills Studley represented Knotel, while a Newmark Knight Frank team of David Falk, Eric Cagner, Jason Greenstein and Matthew Siegel represented the landlord, American Realty Capital New York City REIT.

“The location allows Knotel’s clients to operate in a primary business district with incredible flexibility,” Weiss said in a statement to CO, adding that “the landlord built a high-end and creative installation that was a match for Knotel’s brand” at the property. An NKF spokesman did not immediately provide a comment on the transaction.

While Midtown South has been Knotel’s core market to date, Eugene Lee, the company’s head of property acquisition and business development, told CO last month that Knotel was planning to expand its presence in the “traditional Midtown” office market as well as Downtown Manhattan. Knotel has backed up that strategy by agreeing to recent leases at 40 Exchange Place in the Financial District and now 9 Times Square in Midtown.

Knotel has leased a prolific amount of office space this year as it has sought to expand on the back of a $25 million Series A funding round it closed in February. (Disclosure: Observer Capital, led by Observer Media Publisher, Chairman and Chief Executive Officer Joseph Meyer, is among Knotel’s investors.)