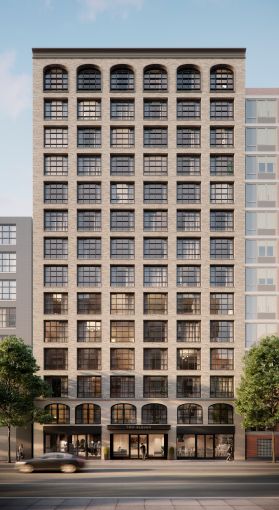 GPB Capital Holdings and Oestreicher Properties have closed on a $47.9 million construction loan for a 14-story condominium in Brooklyn that’s been in the works since at least early 2015, the Commercial Observer can first report.

“We are extremely pleased to have closed on this transaction and have construction for 211 Schermerhorn underway,” Debbie Tsabari, the president of Oestreicher Properties, said in prepared remarks. “The financing package affirms the long-term value of this coveted neighborhood and we look forward to a successful launch of sales and marketing this fall.”

The 48-unit, mixed-use development will feature one- to three-bedroom apartments with custom interiors by architect Morris Adjmi. Residents will be provided with a 1,138-square-foot communal rooftop terrace, a lounge and a media room, a fitness center and a children’s playroom. Other services include a 24-hour attended lobby, a bike storage and private storage units available for purchase. The building also includes 10,000 square feet of ground-floor retail space.

Between 2013 and 2014, developer Nicholas Cammarato paid $16 million to acquire the three parcels that comprise the site between 211 and 215 Schermerhorn Street, as CO previously reported. In August 2015, GPB bought the development site from Cammarato, and in early 2016, GPB filed construction permits for the condo with the New York City Department of Buildings.

Sales are slated to launch this fall.