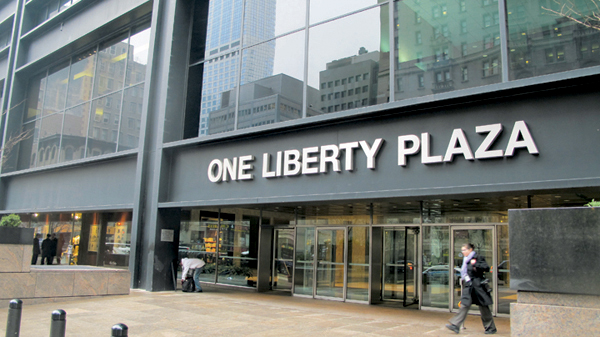 Insurance and risk-management firm Aon has signed a 34,000-square-foot lease at One Liberty Plaza to expand its footprint in the building to 237,000 square feet, according to landlord Brookfield Property Partners.

The company’s space will now include the 28th floor at the 54-story building, which covers a city block from Cortlandt to Liberty Streets between Church Street and Broadway.

The asking rent in the 10-year deal was $63 per square foot, according to The Real Deal, which first reported news of the expansion.

“It’s central location, expansive views and modern space have attracted a number of leading firms from other areas of the city, and we are thrilled to have Aon join that roster,” David Cheikin, an executive vice president at Brookfield, said in prepared remarks.

Aon is relocating from 1 Battery Park Plaza, located on State Street between Pearl and Bridge Streets. The company expects to move into its new digs in the first quarter of 2018. A spokeswoman for Aon did not immediately return a request for comment.

CBRE’s John Nugent and Christopher Mansfield brokered the deal for Aon, while Newmark Knight Frank’s David Falk, Nick Berger, Peter Shimkin and Hal Stein handled the transaction for Brookfield alongside an in-house team. The NKF brokers did not return a request for comment via a spokesman, while a spokeswoman for CBRE declined to comment on the transaction.