The Plan: Office Management Startup Pops the ‘Q’ at One Soho Square 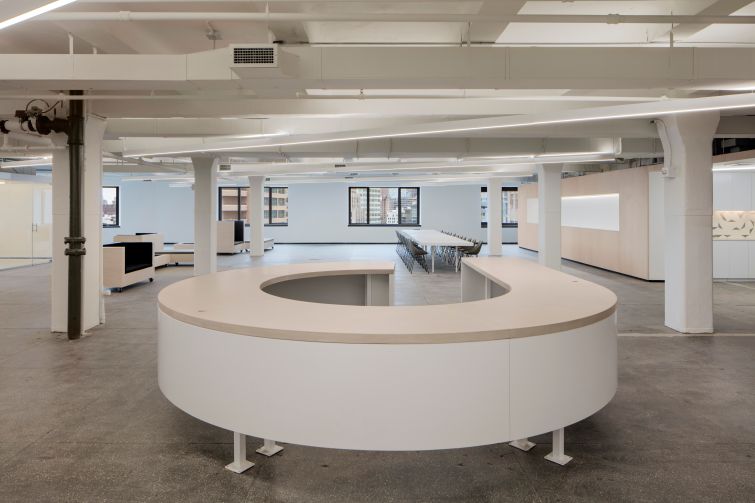 For a company that specializes in providing office maintenance and management services, it’s natural that Managed by Q took picking and building out its own office seriously.

When the company decided to move to a sprawling, 26,000-square-foot full-floor space on the 11th floor of Stellar Management’s One Soho Square in March 2016, it considered every facet of its new habitat with great detail—and would take the time to get it right.

The buildout process started in June 2016 with Q leaving its former headquarters at 670 Broadway and shacking up in a temporary office on the second floor of the building. The temporary space gave the company time to work with Matthias Altwicker and Jens Holm of architecture and design firm Studio A+H to figure out what the space would look like.

“From the first meeting with Q, it became clearly quickly that they were rapidly growing,” said Studio A+H’s Holm, who was referred to Q by fellow Danish architect Bjarke Ingels, an early investor in the company. “One of the challenges and exciting aspects about designing the headquarters was to find a way to have an exciting design but also accommodate growth and flexibility.”

That need “manifested itself in the basic design,” Altwicker said, which “allows for Q to reconfigure how they work and interact on a daily basis.” In addition to more open desks, the office features numerous areas where Q’s 150 or so employees can set up shop and work: window frames that double as benches with views of the surrounding skyline; a library designed by Q Co-Founder and Chief Executive Officer Dan Teran and modeled on “a sensory deprivation chamber, [where] you can lose yourself in work for hours,” according to Teran; and plenty of movable furniture, from lounge seating to large, cushioned bleachers that can be rearranged to accommodate all-hands-on meetings for the entire office.

“This is the first time that we had the opportunity to really design and build out our own space,” said Teran, who noted the contribution of friend and interior designer Casey DeBois of DeBois Design to the space’s buildout and furnishing. “It was an opportunity for us to really express our feelings about what the future of work looks like. That meant having the flexibility of a lot of different types of collaborative spaces.”

The office, built out on a $1.8 million budget, also features a large, Q-shaped reception desk that anchors the main working area; a snack wall is next to the kitchen; and several conference rooms—including a spacious boardroom—occupies most of the east side of the office and provides light and views.

And of course, there’s the building itself, which got an expansive, Gensler-designed renovation that merged 161 Avenue of the Americas and 233 Spring Street to form a state-of-the-art, 768,000-square-foot office complex. Already, e-commerce brands like Warby Parker and Harry’s call One Soho Square home.

Teran said that the space afforded by the floor specs at One Soho Square made it ideal for Q’s needs, as well as its desire to continue growing. “It’s hard to find floor plates this big between 14th Street and Canal [Street]; that kind of led us to the building.”

As did the desire to keep the company in Lower Manhattan. “I think we were really firm on wanting to be Downtown. That’s where our roots are; we started the company in Chinatown, in a small room above a garment factory on Eldridge Street,” Teran added. “The neighborhood here is starting to be a hub for some of the fastest-growing tech companies in New York.”