Stat of the Week: 2017 Midyear Report 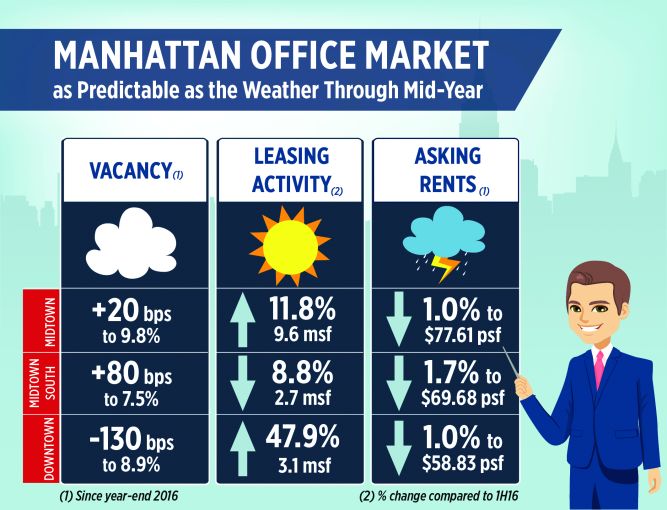 Through the first six months of the year, the Manhattan office leasing market was about as predictable as the weather. Despite a 37.8 percent increase in the vacant sublease supply, above-average leasing dropped the Manhattan overall vacancy rate 10 basis points to 9.2 percent through midyear. New leasing activity totaled 15.4 million square feet—13 percent higher compared to one year ago. In spite of the strong demand, overall average asking rents are down in 12 of the 20 submarkets through the first six months of the year, dropping the Manhattan average $0.23 per square foot to $72.59.

Midtown survived 895,058 square feet of sublease space entering the market during the first half of 2017, which pushed vacancy up only 20 basis points to 9.8 percent. New leasing activity reached 9.6 million square feet, an 11.8 percent increase from one year ago, thanks to 10 new and expansion leases signed that were greater than 100,000 square feet, compared with only five by midyear 2016. Overall average asking rents dropped 1 percent since year-end 2016 to $77.61 per square foot, as seven of the nine Midtown submarkets posted asking rental declines.

Midtown South hit a rough spot through the first half of 2017, as 799,344 square feet of sublease space entered the market. This caused vacancy to jump 80 basis points to 7.5 percent, the second highest quarterly level since third-quarter 2014. Midtown South was the only major market to post a year-over-year decline in new leasing activity with only 2.7 million square feet of leases signed. This 8.8 percent drop-off can be attributed to a slowdown in the TAMI (technology, advertising, media and information services) sector, as this industry recorded an 80.7 percent decline in new leases over 10,000 square feet compared with one year ago. Overall asking rents dropped in four of the five submarkets this year, pushing the Midtown South average down 1.7 percent to $69.68 per square foot.

Downtown performed well during the first half of 2017, as minimal sublease supply was added to the market and vacancy dropped below 9 percent for the first time in 17 quarters. Strong leasing activity pushed down the vacancy rate 130 basis points to 8.9 percent this year. With 3.1 million square feet of new leasing, activity is up 47.9 percent from one year ago. This significant increase was fueled by five new leases greater than 100,000 square feet signed. Class A leasing accounted for 75.6 percent of the market’s activity and surpassed its 2016 annual total in the first six months of 2017. Overall asking rents dipped $0.47 per square foot to $58.83.