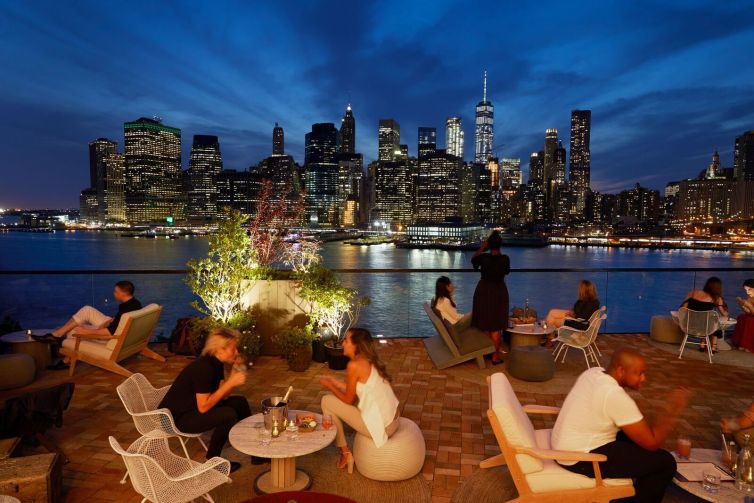 “He will operate the first-floor lounge, café and restaurant, the 10th-floor lounge and rooftop bar, and do the in-room dining from the restaurant,” said David Von Spreckelsen, the president of Toll Brothers City Living New York. “So he will have everything except the banquet space.”

Abramcyk, whose restaurants include Tiny’s & the Bar Upstairs, Warren 77 and Smith & Mills, said that he is selling Gowanus Inn & Yard (a hotel he built at 645 Union Street between Third and Fourth Avenues in Gowanus, Brooklyn), and the 1 Hotel project has come along at just the right time.

“This is our new baby,” Abramcyk said, noting that his 10-year lease will commence in the fall although he has already been operating the F&B at the hotel—in large part to get the rooftop operational in time for summer eating and drinking.

“We tried to accommodate the need to open that rooftop this season whilst we were working out the finer points [of the lease],” Abramcyk said.

While the total square footage is still to be determined and plans yet to be detailed, Abramcyk will have “well over 20,000” square feet in his purview, said Durst Hospitality’s Keith Durst, who represented Starwood in the deal. (Starwood, led by hotelier Barry Sternlicht, is handling the F&B plans.)

Durst noted that Abramcyk had no broker in the transaction. The rent will be a combination of base and percentage of sales, Durst said.

The 10-story, 194-room green hotel opened in February at 60 Furman Street in Brooklyn Bridge Park. More than 50 percent of the property was made using recycled materials and the hotel relies on an 100 percent wind power energy supply, according to Observer. Amenities include the rooftop and bar, which spans 4,000 square feet with a three-foot deep lounge pool. The 10th-floor lounge, not yet opened, is 2,800 square feet with a fireplace.

Spokesmen for Starwood didn’t respond to a request for comment.