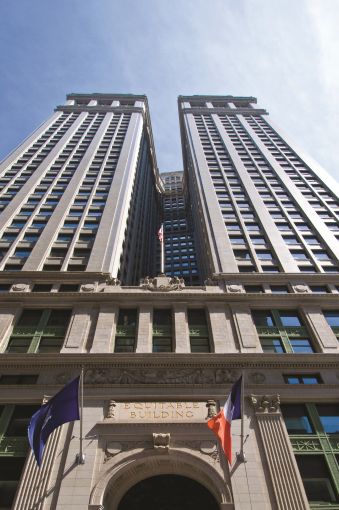 International publishing company Macmillan Publishers will relocate from several locations to 261,000 square feet at 120 Broadway in Lower Manhattan, according to a press release from the property’s owner.

Macmillan will occupy floors 22 through 26 of Silverstein Properties‘ 40-story, 1.9-million-square-foot Downtown office tower between Pine and Cedar Streets known as the Equitable Building via a 20-year deal. The lease was signed on July 28, a Silverstein spokeswoman told Commercial Observer.

Asking rents in the building are in the mid-$50s per square foot, according to The New York Post, which first reported news of the deal.

Andrew Weber, the chief operating officer of Macmillan, said in the release: “The move will be great for our people and our planned growth, and the architectural heritage of 120 Broadway means we will be moving from one of New York City’s great iconic buildings to another.”

MacMillan will leave the Flatiron Building at 175 Fifth Avenue between East 22nd and East 23rd Streets as well as 18 West 18th Street and One New York Plaza to move Downtown in early 2019, Manoff said via a company spokeswoman. The consolidation will represent a 15 percent increase in space.

Manoff said in a statement: “Macmillan is a multi-faceted organization whose various publishing units have unique identities within the company. The size and configuration of 120 Broadway’s floors allow for operational efficiencies, clustering of these units, and personalization of space for individual groups—something absolutely essential for successful collaboration, creativity and author service.”