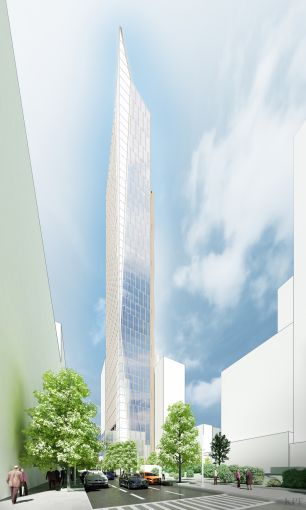 The city and JEMB Realty have struck a deal to bring a school to the developer’s planned office tower at One Willoughby Square in Downtown Brooklyn, according to a press release from the New York City Economic Development Corporation.

The 300-seat, 87,000-square-foot school will anchor the first six floors of JEMB’s 36-story commercial project, which is also known as 420 Albee Square, between Willoughby and Fulton Streets. New York City School Construction Authority have leased the space from the developer, but terms of the lease weren’t immediately available. Both the building and school are set to be complete in the first quarter of 2021.

Forest City Ratner is partnering with JEMB to co-develop the 450,000-square-foot tower. One Willoughby Square will be the first major ground-up office project to rise since Downtown Brooklyn was rezoned in 2004.

Earlier this month, the city finalized an agreement to transfer development rights for several adjacent parcels to JEMB for $18.3 million, according to property records. Also in July, the city sold to the developer the last, 3,132-square-foot piece of the development site for $456,177, a spokesman for EDC said. The developer purchased the main site at 420 Albee Square for $38.5 million in 2014.

“We are thrilled to be part of the redevelopment of Downtown Brooklyn,” Morris Bailey, the chairman of JEMB, said in a statement. “Public-private partnerships can produce catalytic projects and it was a pleasure to work with the de Blasio administration to move this important project forward.

Update: This story was edited to include the square footage of the school.