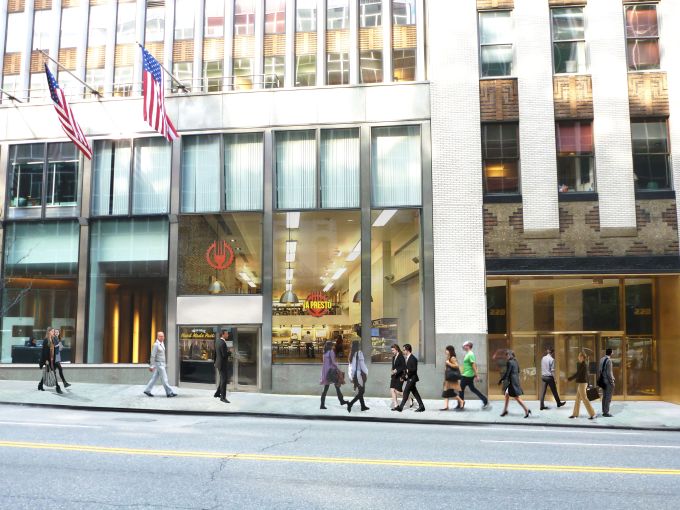 The eatery will occupy 3,300 square feet at the base of SL Green Realty Corp.’s 220 East 42nd Street, also known as the News Building, between Second and Third Avenues, 1,800 square feet of it on the ground floor. The rest of the space is below grade (for a kitchen) and on the mezzanine level (for some seating). The asking rent on the ground floor was $250 per square foot and the lease is for 10 years, sources said.

In October 2015, Yaso Tanbao opened at 148 Lawrence Street at Fulton Street in Downtown Brooklyn. According to The New York Times, which reviewed the DoBro Yaso Tangbao last March: “Zongxing Tu, the chef, worked in Germany in the 1980s before coming to New York and making his name as a master of soup dumplings at the first Joe’s Shanghai in Flushing, Queens.” The publication noted that Tu has three partners Chi Zhang, Kevin Gu and Chongwu Du, all of whom grew up in Shanghai. Gu didn’t immediately respond to CO’s request for comment.

Haz Aliessa of Tower Brokerage, who represented the tenant in the deal, said since Yaso Tangbao has been successful in Downtown Brooklyn, the proprietors wanted to expand. And the Midtown East building appealed because Yaso Tango “caters to a lot of the office crowd.” The new location should be open by September, the broker said. (He didn’t immediately respond with deal information.)

Tenants in the News Building include the fundraising arm of St. Jude Children’s Research Hospital, which CO reported on in December 2015,  real estate insurance company First Nationwide Title Agency, Omnicom Group and TV news station WPIX, which has been located in the property since its founding in 1948.

Roseman declined to talk about deal specifics but emailed a statement: “Ownership was intent on bringing in a new creative concept to the neighborhood, which will complement the current tenants and be very popular with all of the surrounding workers and residents.”