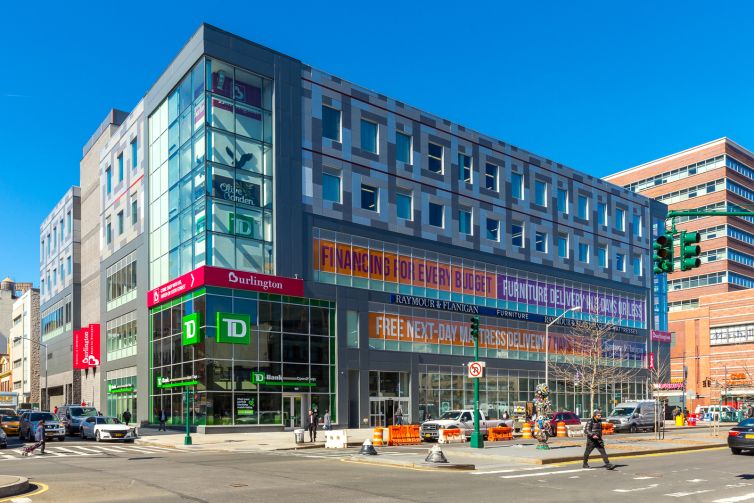 J.P. Morgan Chase and Morgan Stanley originated $125 million in financing on the six-story retail structure at 100 West 125th Street, which sits on the corner of Malcom X Boulevard. The transaction is comprised of a first mortgage and a mezzanine loan, but the amount of each note was not immediately clear, nor was the breakdown of debt that each bank took on its balance sheet.

Meridian Capital Group’s Aaron Birnbaum and Tal Savariego brokered the deal, which carries a five-year term with interest-only payments for the full life of the debt. The transaction closed on Friday.

The new debt package replaces an aggregate of $102 million in financing that Natixis Real Estate Capital provided for the construction of the 200,000-square-foot building over the last two-and-a-half years, property records indicate. CO broke news of the first development loan that Natixis originated on the site, which was a $95 million three-year, interest-only mortgage.

“The new financing provides efficient interest-only payments at a favorable rate and gives the borrower the flexibility to continue its operation of the asset and retire the construction loan,” Birnbaum said through a spokesman.

While the long-awaited Whole Foods is slated to open this summer, the site is already home to American Eagle, Burlington Coat Factory, Raymour & Flanigan and TD Bank are currently open. Olive Garden also has an outpost in the building. The lenders were able to get comfortable with the property because of its “great tenancy” and location on “one of the best corners in Harlem,” according to one of the sources, who spoke on the condition of anonymity.

Sutton’s firm has been an active borrower, last year closing roughly $2 billion in mortgages, according to one of the sources. Most recently, Wharton Properties secured a $60 million refinancing from Bank of China for a property solely occupied by Duane Reade at 661 Eighth Avenue in Times Square. In August 2016, the company received a $195.3 million financing package from UBS and Morgan Stanley for the six-story Nike store at 529 Broadway in Soho.