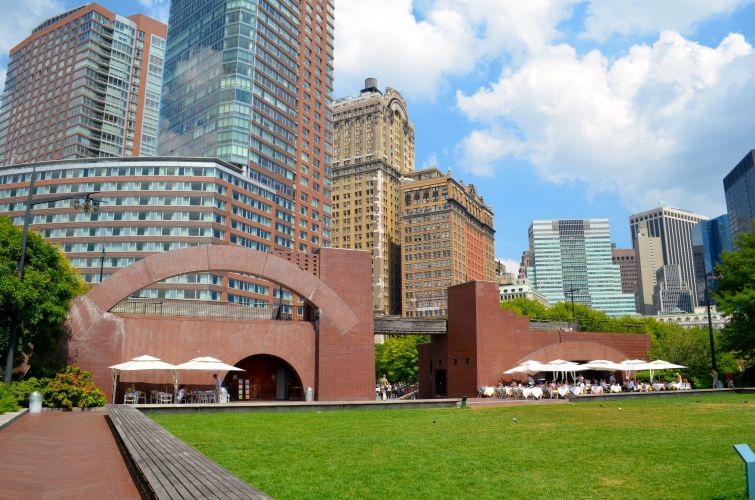 Superstorm Sandy severely impacted New York City in 2012, and since then, the city has worked to ensure that the city is better prepared should another storm hit.

While Wagner Park—the 3.5-acre green space just north of Battery Park that opened in 1996 and is home to open lawns, eatery Gigino at Wagner Park and the Museum of Jewish Heritage—was not affected, the head of the Battery Park City Authority wants to take steps to protect it.

One of the park’s buildings (actually two structures connected by a bridge, with one occupied by Gigino and the other by the public bathrooms) at 20 Battery Place is vulnerable to extreme weather, said Shari Hyman, the president of Battery Park City Authority, which oversees the 92-acre Battery Park City site including Wagner Park. “In order to put in there a resiliency system, you do have to look at the minimum first-floor elevation, which is 16.5 feet. Our goal is to make the building meet current regulations for the flood plane.” The building is currently at 12 feet. Plus the building is in need of repair.

“With a redesign of the building and the lawn, we can put up a storm protection barrier system that is attractive, can be deployed with ease if there is an event and will actually enhance the area,” Hyman said. “The key thing is it’s not just the building redesign. It’s looking at what’s going on in Lower Manhattan and the activity developed and the use of the lawn area in Wagner Park and the outdated setup of the building itself. It’s a holistic plan.” That plan includes building a little footbridge so pedestrians can walk continuously from Pier A to Wagner Park.

Gigino occupies the building via a licensing agreement, which expires at the end of 2017, but its configuration is not ideal.

“It’s not a space that’s conducive to a well-set restaurant,” Hyman said. “A lot of it is outdoors.” She added, “Depending on our timing, we have to consider whether to extend [the agreement].”

According to initial drawings by architecture firm Perkins Eastman, 20 Battery Place will maintain the same footprint but will be reconfigured with more space (maybe even two eateries!) and more options for public amenities. Hyman said plans call for increasing the lawn space by 50 percent, although the current square footage wasn’t immediately available.

In January, Wagner Park came into the spotlight when Gov. Andrew Cuomo talked in his state-of-the-state address about building up 350 miles of new bike paths for the largest state multi-use trail network, called Empire State Trail, to be completed by 2020. The 750-mile trail will connect Lake Erie to the capital region and the New York Harbor to Canada and will terminate at Wagner Park.

Hyman added that the budget is undetermined but will be in the tens of millions of dollars. BPCA is seeking community input on the project, with the next public meeting scheduled for March 22. After that, BPCA will hire a design consultant before moving forward with construction. Hyman expects construction to take two to two-and-a-half years.