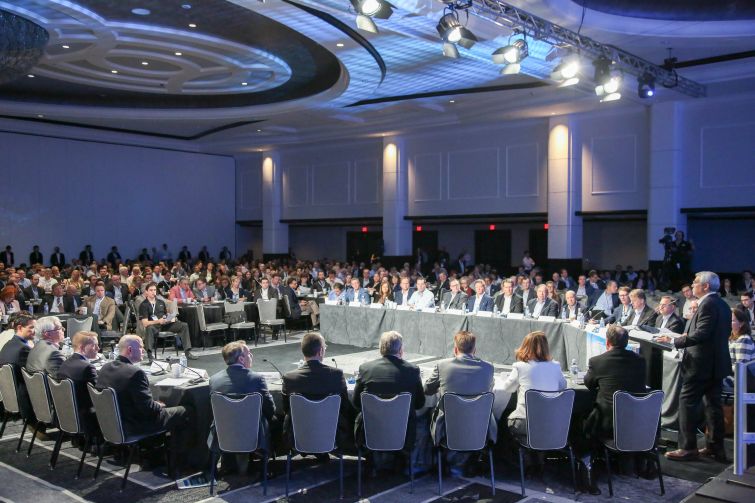 “The orange swan has arrived and things have changed,” announced one participant in the Industry Leaders Roundtable at CRE Finance Council’s 2017 annual conference in Miami. He was, of course, referring to our president elect, who was fodder for some lively chatter as day two of the conference began.

The panelists jumped in to opine on whether having a businessman in the White House would have a positive or negative impact on the commercial real estate market. But, the jury was firmly out. While some described feeling a “collective optimism,” about Donald Trump’s taking the helm in the oval office, others weren’t quite as convinced.

Interestingly, one lender told the audience that he had taken the time to research how many commercial mortgage-backed securities loans list Trump as the borrower—and  found the number to be more than a dozen. So, one thing is for sure, the individual said: “It’s pretty unusual to have a CMBS borrower as president.” (Conference rules prohibit members of the press from directly quoting panelists.)

“He’s a real estate guy, so we can guess what he is going to do. But any disruption presents opportunity,” another executive noted.
Given risk retention’s implementation last month, it was, unsurprisingly, the topic du jour. When the conversation turned to improved underwriting standards as a result of increased regulation,  lenders noted that the deluge of legacy CMBS loans maturing this year and subsequent need for refinancing could throw a spanner in the works. “There will be a lot of product, a lot of originators and a lot of stress on underwriting,” said one panelist.

Because of the risk retention rule, CMBS originators will now have to hold on to 5 percent of the risk in a securitization. As the industry patiently waits for the regulators to weigh in on different risk retention structures, panelists were asked whether they believe the vertical, horizontal or L-shaped variation will ultimately come out on top.

“We were surprised how the impediments to doing vertical disappeared over the year,” said one industry expert.  “It’s great for the industry that vertical deals got done so we can see what a risk retention deal looks like.”

Don’t hold your breath if you’re expecting to see horizontal or L-shaped structures appear in the market before the summer, participants agreed—and each structure has its pros and cons to consider. Horizontal deals almost resemble a covered bond (a debt security chiefly issued in Europe that is similar to an asset-backed security, except for the fact that it stays on the issuer’s balance sheet) noted one lender,  but present risk for the issuer. The  L-shape structure, on the other hand, makes more sense for an investor as the risk is shared between deal parties. For this reason, “the market will likely gravitate [to the L shape],” remarked one executive.

The uncertainty is undoubtedly weighing some market participants down. “It’s like staring at the ocean from 50,000 feet and trying to find an island of certainty,” lamented one originator. “Lawyers aren’t able to tell their clients which structures work. What we really need right now is regulatory certainty.”

Another lender agreed. “The decline in volume of CMBS is caused by the uncertainty. The best thing for CMBS is to turn the clock forward—let’s get some deals done. The uncertainty is what causes the biggest problem for this industry.”

When uncertainty lessens and steady deal flow returns, the other looming question is how CMBS will compete with other sources of financing going forward. The industry is specifically concerned about whether or not CMBS lenders will be able to  re-capture what nonregulated or insurance companies absorbed in terms of product. Ultimately, “the lowest capital option will win, it’s just the way of the world,” said one panelist. The increased competition may not be the worst thing, however. “Look at how the market has picked up the slack among the maturities on the legacy portfolios—it is so much more resilient that you’d expect.”

Chatter gradually returned to president elect Trump as the panel drew to a close. “In the three months since the election, the only thing we know is that there’s a lot we don’t know. And maybe that Twitter is difficult to pry away from him,” mused one lender. “Our expectation for the next 4 to 8 years should be for really unexpected events to happen repeatedly,” agreed another.

On a positive note, while we wait to see what comes down the pipeline in 2017, now is the time to reform and establish good habits, agreed the roundtable. “The industry should think about long term consequences and not go quarter-by-quarter. We need to establish predictable norms in the borrowing and lending community, and regulation will help us do so,” said one lender.

“Once the machinery gets worked out securitization will be very compelling, as it once was,” said another executive. “The new beginning will be when we turn the corner on regulation and put fear behind us.”