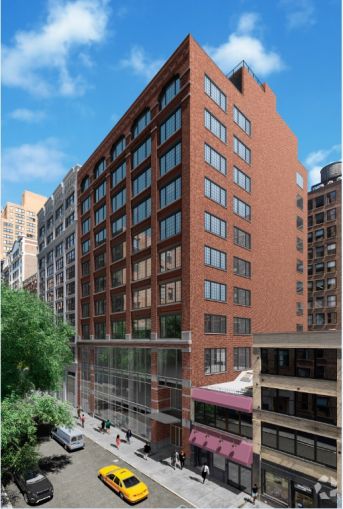 Three years after buying 125 West 25th Street as it neared foreclosure, Normandy Real Estate Partners has sold the Chelsea building for $150 million, the company announced in a press release today.

Buyer AFIAA, a Swiss pension fund, closed the whopping purchase last Friday, according to a spokeswoman for the seller. The 138,000-square-foot building between Avenue of the Americas and Seventh Avenue is anchored by the headquarters for Peloton Interactive, an indoor cycling company that occupies about 52,600 square feet.

Normandy, Waterbridge Capital and NTT Urban Development bought the building in July 2013 for $54 million, property records indicate. The new owners saved the then-empty building from foreclosure, according to The Real Deal, which in September reported that the AFIAA deal was in contract.

The trio of owners has poured $20 million into improving the building over the last three-plus years, according to the release. Along with upgraded infrastructure and a new lobby, windows at the property were also expanded.

“When we acquired 125 West 25th Street in 2013, we were attracted to the location—in the middle of Manhattan’s technology and media center—and we had a vision of how we could redevelop the asset to set it apart from other buildings in the area and that would draw in future tenants,” said Paul Teti, a principal at the Morristown, N.J.-based Normandy, in prepared remarks. “That vision came to life in just three years, in coordination with Waterbridge and NTT, by creating a state-of-the-art facility that became the perfect new home to fitness powerhouse Peloton.”

The fitness company inked its first deal at 125 West 25th Street in December 2015, taking 40,750 square feet on four floors. In September, the Peloton expanded to another full floor for 11,854 square feet, as Commercial Observer reported at the time.

The sellers were represented by Adam Spies, Douglas Harmon, Kevin Donner and Adam Doneger of Cushman & Wakefield, while AFIAA was represented by independent broker Samuel Lefkowitz, who could not immediately be reached for comment.