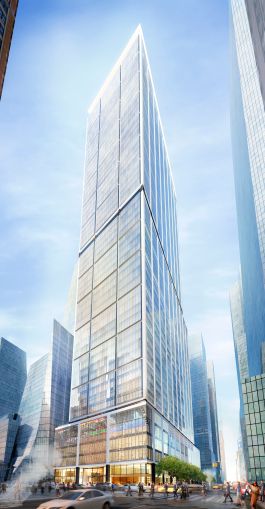 BlackRock has committed to anchor Related Companies and Oxford Properties Group’s 50 Hudson Yards, the yet-to-be-built tower on the Far West Side.

The massive private equity firm has pledged to take 850,000 square feet across 15 floors of the 2.9-million-square-foot property, according to a press release from the developers. BlackRock’s lease will be for 20 years, according to The New York Times, which first reported news of the commitment. It wasn’t immediately clear what the developers were asking for rent.

“We’re proud to have our name on the marquee of our future home, 50 Hudson Yards,” Rob Goldstein, the chief operating officer of BlackRock, said in a statement. “This state-of-the-art building will be equipped with the design, technology and resources to attract and retain the best talent in the industry to serve our clients.”

BlackRock, currently based at 55 East 52nd Street between Park and Madison Avenues, is slated to move into the 58-story, full-block tower once construction is completed in 2022. Work is slated to start on the property next year.

“BlackRock is one of the world’s most trusted investment firms and known for its forward-thinking leadership team,” Related Chief Executive Officer Jeff Blau said in prepared remarks. “Their decision to relocate after nearly three decades on and around Park Avenue is another strong vote of confidence in our collective vision for Manhattan’s West Side. They will join an unprecedented collection of global influencers in media, fashion, beauty, tech, law and finance at Hudson Yards.”

The firm had been mulling a move to either 50 Hudson Yards or Tishman Speyer’s The Spiral—a planned 3-million-square-foot skyscraper a few blocks to the north.

The developers have also rolled out the design for the property, for which it tapped Foster + Partners, headed by Sir Norman Foster. BlackRock employees will have an exclusive elevator that they will be able to access on 10th Avenue. Floor plates will be no smaller than 50,000 square feet, the release indicates, and will each be able to hold 500 people.

That ability to handle density might have played a role in the financial firm’s decision, since the move also includes a deal with New York State. A separate press release today announced that Empire State Development Corporation and BlackRock had reached an agreement that the equity behemoth would increase its workforce by 700 employees and retain an existing 2,672 workers over a 10-year period as part of the move. During that time, the state-run ESDC will grant BlackRock about $25 million in performance-based tax credits.

Related purchased the last parcel necessary for 50 Hudson Yards in January, paying $152.3 million, as Commercial Observer reported at the time. The plot, with an official address of 427 10th Avenue, was home to a since-shuttered McDonald’s.

Meanwhile, its first tower, 10 Hudson Yards, started taking in its first tenants—which include Coach, L’Oreal and SAP—this May. Construction is underway at the neighboring retail complex, The Shoppes & Restaurants at Hudson Yards, as well as the 90-story 30 Hudson Yards.