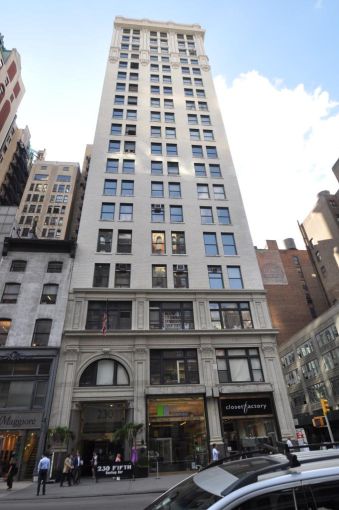 Executives at Newmark Holdings will have sweet dreams after its recent deals.

In the larger transaction, Envogue International inked an expansion of 12,652 square feet that brings its total footprint in the 20-story building to 25,933 square feet.

The company, which manufactures high-end bedding products, currently occupies the part of the 13th and 14th floors, and will now add a portion of the 18th floor of the 20-story building between West 26th and West 27th Streets. Envogue has been growing in the property in recent years. Five years ago, it was just in part of the 14th floor and last year, the company added its 13th floor space.

And Ellison First Asia, a fashion-bedding company that produces quilts, blankets and pillows, has renewed its 10,528 square feet of space on the seventh floor. The asking rent in both deals was $55 per square, according to information provided by Newmark Holdings.

Harvey Richer of Newmark Grubb Knight Frank represented the landlord and tenants in both of the transactions. Richer did not immediately return a request for comment via a spokeswoman.

In addition to those deals, other recent leases in the building includes the expansion of Feizy Imports & Export Company, a manufacturer of fine hand-knotted, hand-tufted and power-loomed rugs, to 4,572 square feet on the second floor, as well as a new 2,644-square-foot lease on the 19th floor for Veritas USA, a manufacturer of robes and towels from Turkey.

“These tenants—new, existing and expanding—add tremendous vitality to the exceptional mix of businesses at 230 Fifth Avenue,” Jane Gural-Senders, an executive director at Newmark Holdings, said in a statement. “Such strong leasing momentum at the property also helps build and maintain its status as one of the leading showroom buildings in the gift and home textile industries.”

Constructed in 1914, the 400,000-square-foot building at 230 Fifth Avenue was formerly known as the “Lighting Building” and was acquired by Newmark Holdings in 1958.