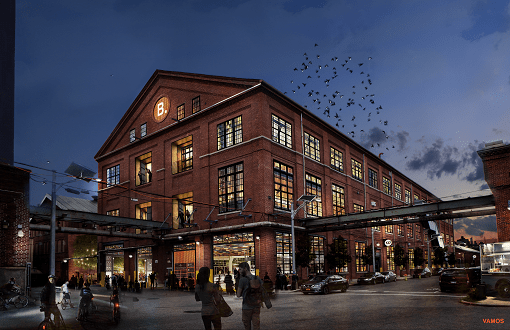 A rendering of the Brooklyn Navy Yard. tcullen2015

A Dutch company is making port at the Brooklyn Navy Yard, where it plans to open a new incubator for up-and-coming companies.

B.Amsterdam, a European business incubator, has signed a deal with the city to occupy 100,000 square feet at the converted shipyard, which sits on the waterfront between the Vinegar Hill and Williamsburg sections of Brooklyn.

The facility will allow European companies to expand their foothold in New York City by working at the incubator, creating 500 jobs in the process, according to a press release from the Brooklyn Navy Yard Development Corporation—the entity that runs the city-owned business district. New York entrepreneurs will get a chance to grow in Europe as part of the deal, working out of B.Amsterdam’s site in the Netherlands.

B.Amsterdam’s incubator will focus on hardware and technology, according to the release. No less than 15 percent of the space will be used for manufacturing.

The Dutch company will be in Building 127, according to a spokesman for the Navy Yard. It’s one of many to move into the more than 50-building Navy Yard as of late. Mast Brothers, the Brooklyn-born chocolatier, signed a 65,000-square-foot deal to relocate to the manufacturing hub, as Commercial Observer reported in the spring. Brooklyn Brewery will also occupy 75,000 square feet at the Navy Yard’s Building 77, as previously reported by CO.

The Navy Yard spokesman said the deal was “long term,” but declined to provide additional details on the agreement.