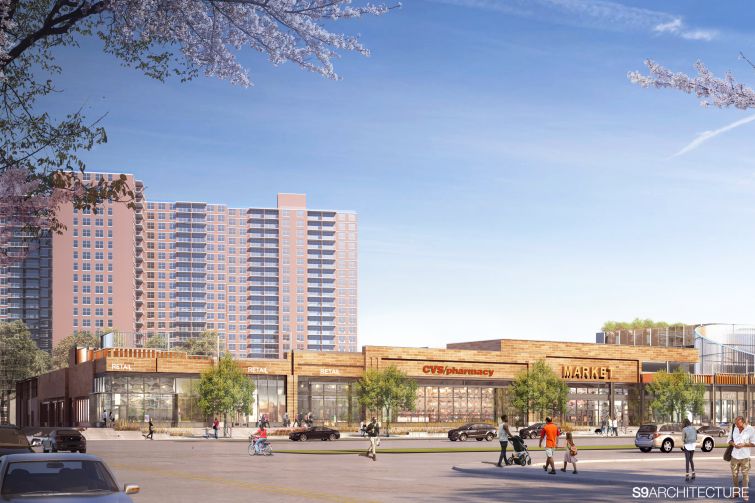 A rendering of the retail portion of 532 Neptune Avenue. Liam La Guerre

The pharmacy will occupy a portion of the retail section of the planned 576-unit building between West 5th and West 6th Streets, which will be Coney Island’s tallest tower at 430 feet, landlord Cammeby’s International announced Wednesday.

Cammeby’s declined to disclose the asking rent and the length of the lease. A team of Jeff Winick, Lee Block and Darrell Rubens of Winick Realty Group represented the landlord in the transaction, while CVS did not have a broker. It wasn’t clear who from Winick worked on the deal.

“CVS/pharmacy, which has served the Coney Island community for years at this location, provides a vital service to residents, and we could not be more pleased that they have decided to be part of the new neighborhood destination we are creating here,” Jacob Cohen of Cammeby’s said in prepared remarks.

The retail section of the building will be completed in June 2017. Trump Village Shopping Center will be demolished in phases that will allow the current CVS to operate at the site until the new store is constructed in late-2017.

“We’re thrilled to be a part of the community and offer our best-in-class pharmacy services, along with convenient access to health and beauty products as well as better-for-you snacks,” a CVS spokeswoman said.

Cammeby’s 532 Neptune Avenue is a portion of a project called Neptune/Sixth, which includes a separate standalone seven-story retail and office building at 626 Sheepshead Bay Road. That building is under construction and expected to be completed next summer.