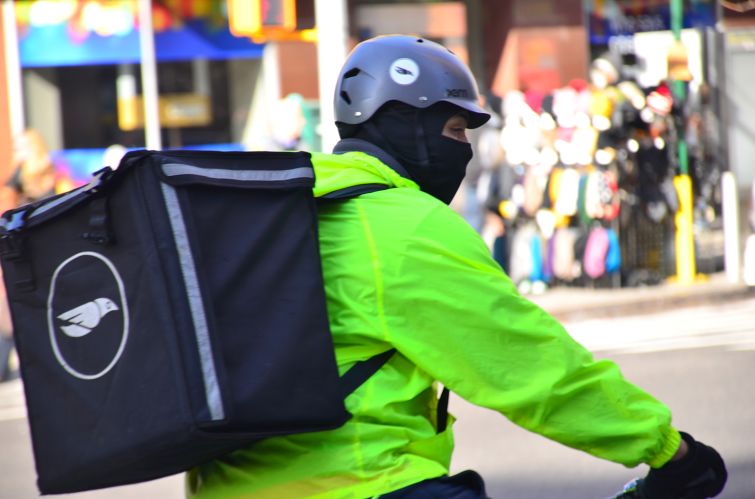 If the biggest stumbling block for restaurant survival rate in New York City is the astronomical rent, perhaps the monthly dues needn’t be as big an issue as one thinks.

One of the delivery services with a finger on the pulse of the changing times is Homer Logistics.

When Adam Price, the founder of Homer Logistics, moved to New York from California in 2013, he noticed a seemingly insurmountable flaw in the delivery system. A delivery guy goes out on a delivery and spends half his time bringing food to the customer. He then has to go back to the restaurant to get more food. Wasn’t the return trip sort of a waste? (“Dead miles” as Price called it.)

Price also saw that a restaurant in a certain locality had the highest delivery volume within the neighborhood it operated—as did its competitors. But they were each sending their own delivery personnel to the same areas, even the same buildings, micromanaging the process and still getting negative feedback about their delivery.

In response, he developed Homer Logistics, a concept he calls micro-freight. It operates a little like Uber but for food delivery. Delivery guy picks up an order. Drops it off. And rather than returning to the restaurant (the dead miles), he gets his next order at a different restaurant.

Price declined to reveal the cost of Homer Logistics’ services, but he said that it is priced around what it would cost the restaurant to do its own deliveries.

Convincing restaurants that a service like this makes sense wasn’t easy at first, Price said. Initially, it was only Price riding his bike to make deliveries after he managed to talk one restaurant in Hell’s Kitchen to opt for Homer. But gradually restaurants started to see the importance of streamlining delivery.

The delivery service now has well-known restaurant clients around Manhattan —the only borough it operates in—including salad chains Chopt and Just Salad, Mexican food chain Dos Torros, Chick-fil-A, frozen yogurt chain Pinkberry and Landmarc, a French and Italian bistro at Time Warner Center. The most active restaurant corridors it operates in are the Hell’s Kitchen area in Midtown West, Avenue of the Americas and Seventh Avenue in Cheslea and Ninth Avenue between West 46th and West 53rd Streets.

“The transit time is less impactful than the terrain information,” Price told CO. “Transit time tells us that we’ll be there in 15 minutes, but each building has a different situation. Sometimes the delivery person has to wait downstairs for the person to come and pick up his order. Sometimes they’re allowed to use the service elevator. But not knowing things like this wastes time.”

Price said that restaurants have seen a 20 to 30 percent surge in delivery business when Homer Logistics takes over their delivery operation.

“Software development has become easier, so even smaller businesses can go digital and implement online ordering,” Price said. “Online ordering is more of a millennial thing, and millennials have recently started becoming income-earners.”