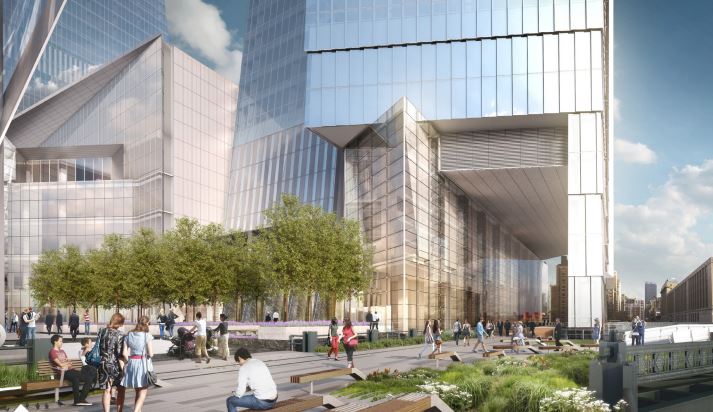 Intersection and Sidewalk Labs, both of which are overseen by former Bloomberg LP head and ex-Deputy Mayor Daniel Doctoroff, signed a deal for 67,000 square feet at the 1.8-million-square-foot tower, according to the release. The lease is for 10 years, a Related spokeswoman told Commercial Observer. The companies will occupy the 26th and 27th floors of the 52-story office tower at the corner of West 30th Street and 11th Avenue.

“Our focus is on using technology to improve life in cities,” Mr. Doctoroff said in prepared remarks. “As a leading data-driven, connected neighborhood, Hudson Yards is the perfect fit for us. 10 Hudson Yards is not only a technologically advanced home, but Hudson Yards more broadly will give us the opportunity to work with Related, visitors, residents and businesses there to explore how creative use of data and technology can make it an even greater place to work, visit and live.”

The asking rent was not immediately available, but tenants at the building have been paying $70 to $80 per square foot, according to The New York Times, which first reported news of the deal.

It’s also an interesting move for Mr. Doctoroff, who was deputy mayor for economic development and recovery after 9/11 during the Bloomberg administration and advocated for a New York Jets stadium on the same site where Related and Oxford are now developing. Those plans never materialized, however, after pushback from then-Assembly Speaker Sheldon Silver and James Dolan, the owner of Madison Square Garden, which is nearby and would’ve suffered from competition with the new stadium. But during his tenure as deputy mayor, the Bloomberg administration rezoned in 2005 a swath of the Far West Side, where Hudson Yards now is under construction, to spur development.

“Moving here will also mark a milestone for me,” Mr. Doctoroff said in the release. “The effort to turn this neighborhood into an engine of growth for New York City has been a personal mission for me for 20 years and it is very exciting to see that dream becoming a reality.”

Intersection was formed last year following the merger of two similar companies, Control Group and Titan, that advise on urban policy, according to the press release. Sidewalk Labs, which incorporates technology into urban planning issues such as transportation and infrastructure, is the lead investor in Intersection, for which Mr. Doctoroff is the chairman. The executive formed the company in partnership with Google following his departure from Bloomberg, which he ran until former Mayor Michael Bloomberg resumed the helm in 2014.

Sidewalk Labs is leaving the Woolworth Building at 233 Broadway between Barclay Street and Park Place, according to a spokesman for the company. Intersection also has offices at the building, as well at 100 Park Avenue between East 40th and East 41st Streets. The move marks the latest in a string of tenants leaving the traditional offices for new product on the Far West Side. Coach, L’Oreal and SAP will together occupy the bulk of 10 Hudson Yards, with The Boston Consulting Group and VaynerMedia filling out the rest.

Stephen Ross, the chairman of Related, in the release touted the allure of Hudson Yards and Mr. Doctoroff’s decision to relocate to the emerging mixed-use community. The executive also credited Mr. Doctoroff with making development in the area happen, as well as coining the name “Hudson Yards.”

“Hudson Yards is the first New York City neighborhood to offer a true 21st century experience to New York’s residents and employees, and is an ideal location for Intersection and Sidewalk Labs to design innovations that will make other cities more resilient and efficient,” Mr. Ross said. “This latest lease also represents a tremendous milestone as both 10 Hudson Yards and 30 Hudson Yards are now nearly fully spoken for.”

At the tail end of last year, Related and Oxford announced that it had secured the $5 billion in financing for the neighboring 30 Hudson Yards, which is also completely occupied by tenants who have bought office condominiums. Time Warner is taking the bulk of the comparably larger, 2.6-million-square-foot building, along with private equity firm KKR, which is taking 343,000 square feet, and Wells Fargo, which bought more than 550,000 square feet of office space.