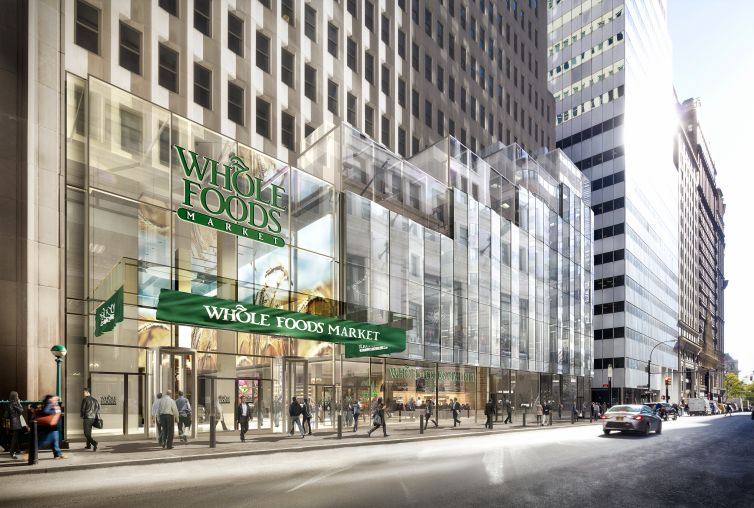 Rendering of Whole Foods at One Wall Street (Image: DBOX for Macklowe Properties).

Harry Macklowe’s Macklowe Properties may still be converting One Wall Street into a residential building, but the company has secured its first commercial tenant: Whole Foods Market.

The grocery chain will occupy 44,000 square feet of the 155,000-square-foot retail space, spanning two floors for shopping and one for backend operations, Commercial Observer can first report.

“Whole Foods Market will be a game-changing anchor for One Wall Street and contribute greatly to the retail renaissance taking place in the new Downtown,” Peter Whitenack of RKF said in prepared remarks. “We are now seeing the results of more than a decade of rebuilding, reinvesting and reimagining, and fully expect that Whole Foods Market will attract more, high caliber brands seeking to establish a presence Downtown and the Broadway corridor, in particular.”

Whitenack and colleagues Robert K. Futterman, Jaclyn Totolo and Scott Zinovoy are marketing the retail space at One Wall Street.

The New York Post reported in January that Whole Foods was mulling space in the Financial District building, which Macklowe bought in 2014 for $585 million from Bank of New York Mellon. The new store is expected to open in late-2018, according to Macklowe Properties.

“We’ve long enjoyed serving the downtown community at our Tribeca location, but look forward to expanding our reach and bringing Whole Foods Market closer to home for area residents, workers and visitors,” said Christina Minardi, the regional president for Whole Foods Market’s Northeast region. “Our growth in the area will provide Downtown Manhattan with greater access to the highest quality food, service, community partnership and convenience that the 10 current neighborhoods we serve around New York City have come to enjoy.”

A spokeswoman for Macklowe Properties declined to provide leasing details.