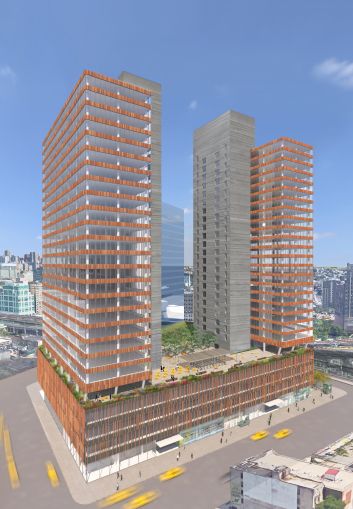 Tishman Speyer has checked off the necessary boxes to kick off a massive Queens development.

The company and its development partner Qatari Diar have purchased a Long Island City plot and secured financing to build there two adjoining office buildings totalling 1.1 million square feet. Construction of the 27-story towers is slated to begin next year with work finishing up in 2019, according to a press release from the developer. The plot sits along Jackson Avenue between Queens Plaza South and 42nd Road.

The buildings, which past reports have dubbed One and Three Gotham Center, are already 75 percent pre-leased, coming out to about 800,000 square feet that’s spoken for. Coworking giant WeWork accounts for more than 250,000 square feet of that space. Tishman declined via a spokesman to disclose any other tenants that have signed on.

Bank of Ozarks provided financing for the acquisition of the site, which is being sold by the New York City Economic Development Corporation. How much debt Tishman Speyer acquired was not immediately clear. The Real Deal reported in February that the global developer is also seeking to raise $145 million in EB-5 funding for the development.

“Thanks to the City of New York’s investment in the area’s infrastructure, enlightened policy decisions and the active support of the New York City Economic Development Corporation, the local community and its elected officials, Long Island City has become a model for 21st century urban development,” Rob Speyer, the company’s chief executive officer, said in prepared remarks. “Tishman Speyer is proud to continue our role in unlocking the area’s full potential as one of the most dynamic, live-work-play neighborhoods, not just in Queens, but in all of New York City.”

The project is estimated to cost $706.7 million, as Commercial Observer reported in April. Acquisition of the 71,692-square-foot site was expected to cost $10.8 million, construction slated to run $388.4 million and soft costs were to total $72.7 million.

The developer will also receive $65 million in tax breaks and deferrals from the New York City Industrial Development Agency and the New York City Department of Finance. An affiliate of Tishman Speyer applied for the abatements in April, as CO reported at the time. NYCIDA, a subsidiary of the NYCEDC, is providing $8.3 million in tax benefits to the project. The remaining $56.3 million is coming from the DOF’s Industrial and Commercial Abatement Program, otherwise known as ICAP.

The towers include retail space, which will be situated in a four-story podium linking the two buildings, according to the Tishman Speyer release. It will also have parking spaces, a food hall and a restaurant. The square footage will be split evenly between the two buildings, the developer’s spokesman confirmed.

Tishman Speyer is pretty familiar with the western Queens neighborhood these days. In 2011, it wrapped up construction of an adjacent site known as Two Gotham Center, a 700,000-square-foot office building that is entirely leased to New York City Department of Health & Mental Hygiene. At that same time, it sold the building to Toronto-based H&R Real Estate Investment Trust for $415.5 million.

H&R is now working with Tishman Speyer across the street on a three-building residential project in LIC that will lead to 1,789 rental units. The 1.2-million-square-foot development will include 15,500 square feet of retail space, as CO reported in December.