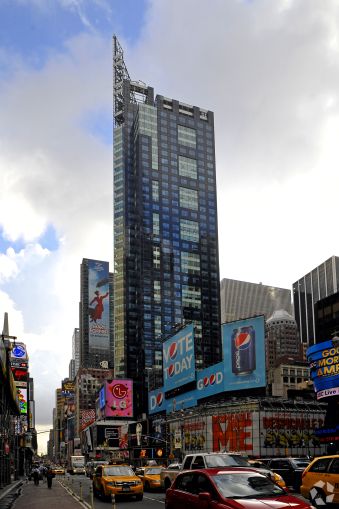 The loan consolidates previous debt on the property, including $350 million in debt that MetLife provided in September 2011, property records indicate.

Edge owns 1540 Broadway in partnership with HSBC Alternative Investments, as Commercial Observer has previously reported. The building, also referred to as the Bertelsmann Building, was acquired in two phases: In 2010, Edge and HSBC purchased a 49 percent stake from what was called CB Richard Ellis Investors (CBREI had picked up the entire tower for $355 million in 2009). The following year, in an off-market transaction, the partnership purchased the remaining 51 percent stake.

Vornado Realty Trust owns the 197,000 square feet of street retail at the base of the building, and in 2010 revamped the entire space. The real estate investment trust’s Edward Hogan and Jason Morrison oversee retail leasing for the property and tenants include MAC, Disney, Forever 21, Sunglass Hut and U.S. Polo Association.

The borrower, Edge, has locations in both Washington, D.C., and Miami, and owns three other office towers including 4 New York Plaza in Manhattan, and 1350 Eye Street and 1625 Eye Street in the nation’s capital.
Representatives for EDGE and DekaBank were not immediately available for comment.