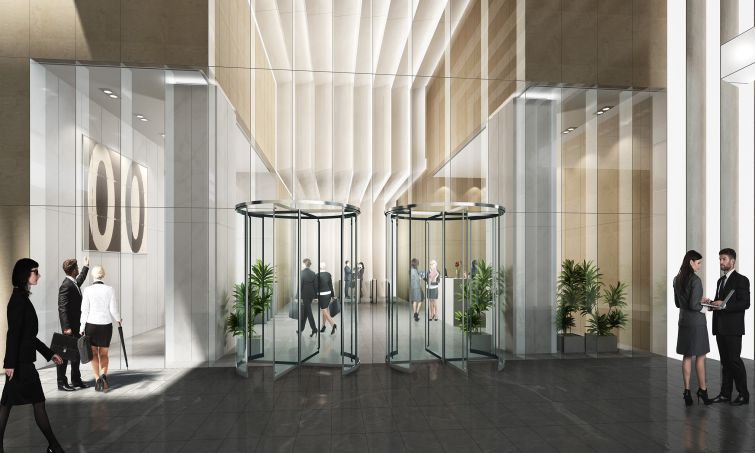 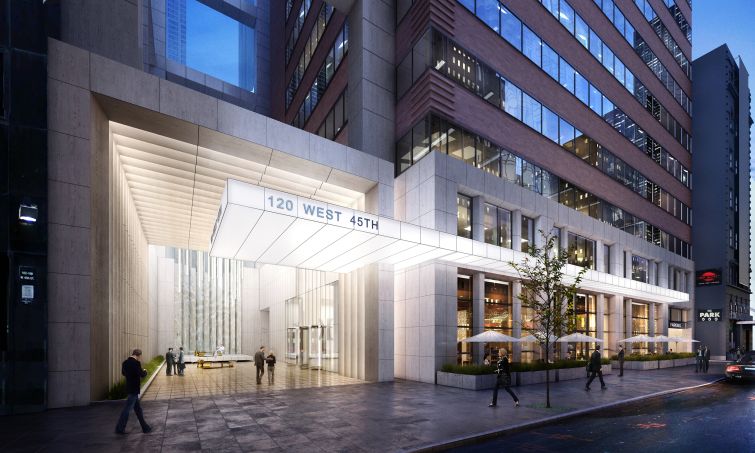 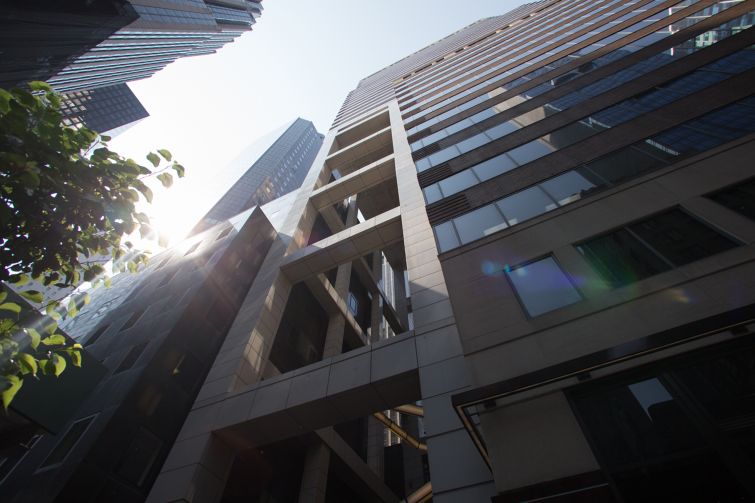 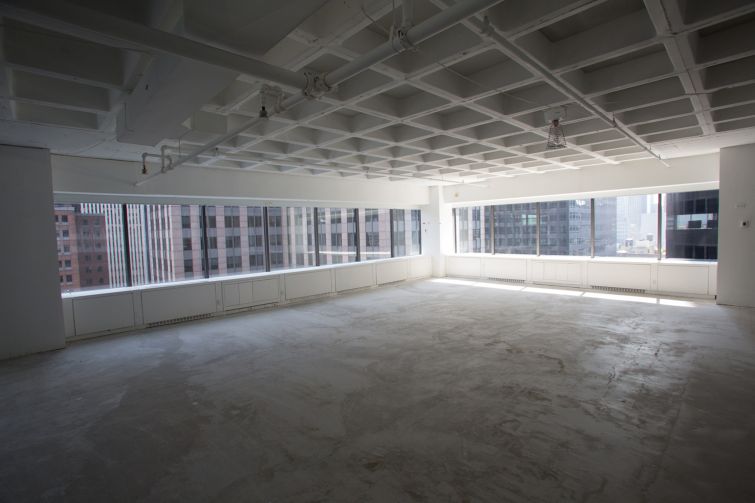 The 24th floor of the building is the largest floor with 13,315 square feet of space. It also has waffle-styled ceilings (Photo: Aaron Adler/For Commercial Observer). Liam La Guerre 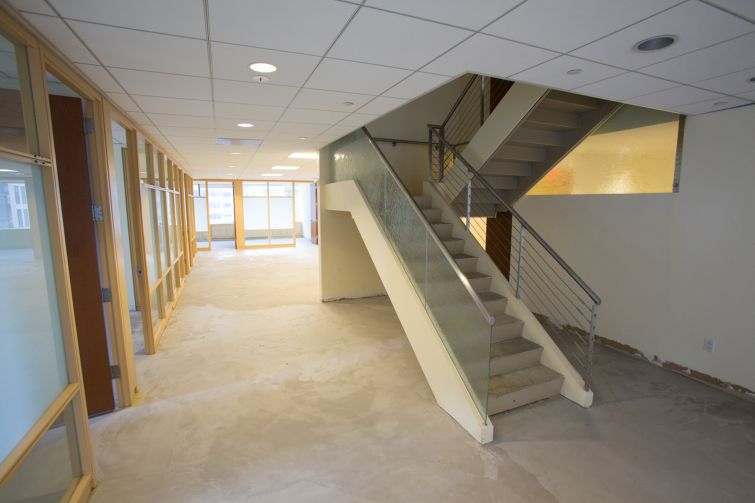 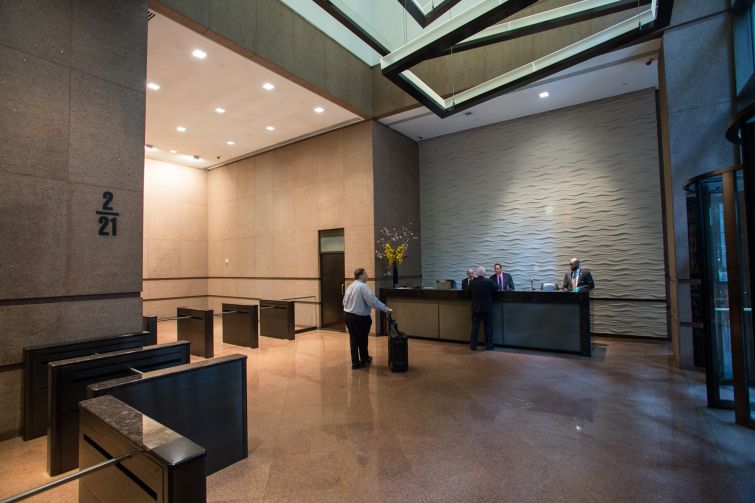 The lobby will be completely renovated to pull out the red granite and brighten the space (Photo: Aaron Adler/For Commercial Observer). Liam La Guerre 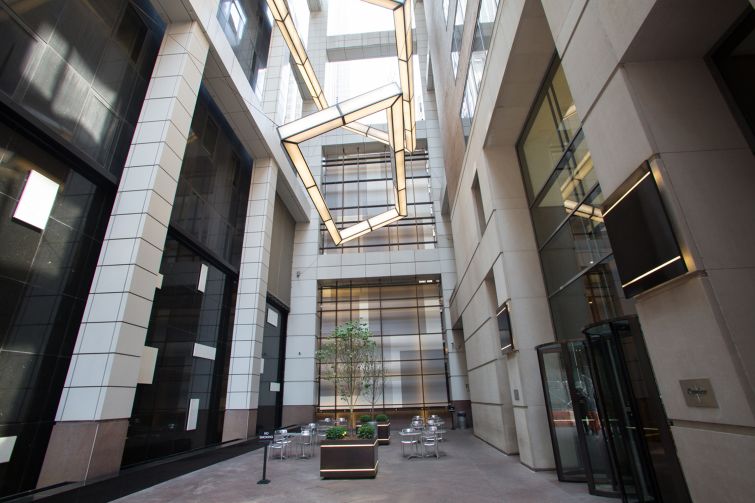 With a big stock of contemporary, glassy office buildings coming to Manhattan—especially in Hudson Yards and Downtown—landlords of older towers have a choice: update or be ignored.

Kamber Management Company chose the first option with Tower 45 at 120 West 45th Street between Broadway and Avenue of the Americas in Times Square. The developer acquired the 458,000-square-foot building for $365 million from SL Green Realty Corp. last year and has planned a $20 million makeover.

The building’s noticeably outdated features include a roughly 15-foot, medieval style-metal gate that opens up to the entrance of the 1988-building, red granite flooring and walls in the lobby and a funky 15-story (yes, nearly 175 feet tall!), outdoor atrium.

“In the late 80s, I would get [these features] in this neighborhood, but it’s not that way anymore,” Steven Levy, a principal of Kamber, told Commercial Observer during a recent tour of the building.

Because of the “bizarre” atrium (their word, not ours), the building is able to have its largest floor plates toward the top half of the 40-story tower and the smallest floors on the bottom half. This effect allows for more tenants to have better access to views and light. (That’s the good part.) But light is blocked because of the surrounding buildings making the outdoor seating area dark. Also the atrium has a problematic 1980s-style artwork suspended by wires, which actually get in the way of cleaning the columns and the side of the building.

“It could be one of the greatest entrances of New York City, when you talk about the ceiling heights. It has fantastic potential, we think. But it’s not just a great space—it’s awkward,” said Richard Nemeth, a principal at Kohn Pedersen Fox, which is designing the modernization. “It provides light and air to the Durst building next door [at 1155 Avenue of the Americas], and it is required to be kept.”

KPF reimaged the outdoor atrium with more lighting and plants to make it more inviting. They are also designing a water-based installation to catch people’s attention.

The atrium leads directly into the lobby, but the two areas have varying themes. So KPF is planning to bring it into it. Dated red granite walls and floors of the main lobby will be stripped for brighter white walls and gray granite floors, which will continue into the outdoor atrium, blending the two spaces. And while the plans haven’t been finalized yet, KPF is designing a rippled ceiling of just three stories for the atrium. The project is expected to start later this year and hopefully will be completed by summer 2017.

“The lobby and the atrium would match, and it would be one big space,” Nemeth said. “I think that the entrance is hurting the building. And I think we can turn it into a positive.”

Besides the lobby and atrium, hallways and bathrooms throughout the building are currently being updated with black granite countertops and Carrara marble floors, which Milo Kleinberg Design Associates imagined. And nine new elevators will be added in the building as well by next year.

An Avison Young team led by Arthur Mirante, A. Mitti Liebersohn, Michael Gottlieb and Gregory Kraut is marketing the roughly 80,000 square feet of space available to law and tech firms, financial companies and research organizations. Asking rents in the building range from the high-$60s per square foot to the mid-$80s per square foot.