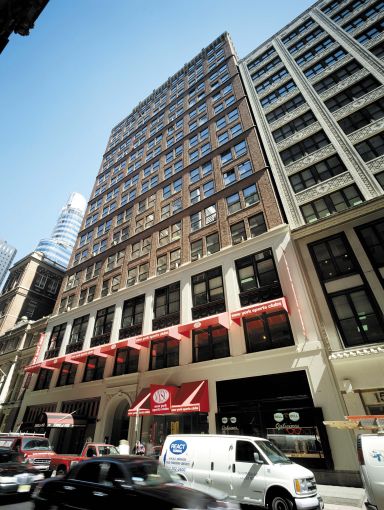 A public relations firm and a maker of software products have signed deals at 19 West 44th Street in the Bryant Park area for a combined 19,300 square feet of office space, Commercial Observer has learned.

Publicist Kaplow Communications has the larger deal, renewing and shrinking to 13,156 square feet at the building between Fifth Avenue and Avenue of the Americas for five years. The company will continue to occupy a portion of the sixth and seventh floors of the 18-story property, which is also known as the Berkeley Building, according to JLL, which handles office leasing in the property. Kaplow currently has 15,504 square feet in the building on those two floors, according to CoStar Group.

Kaplow, which first moved into the 292,968-square-foot building in 1999, was represented by Robert Goodman of Colliers International. Mr. Goodman did not immediately return a request for comment via a spokesman.

In the second deal, AFS Technologies, which provides software for manufacturers, distributors, sales agencies and retailers, renewed its 6,143-square-foot lease for three years on part of the seventh floor of the building. R. Craig Coppola of Lee & Associates, who represented the tenant, did not immediately return a request for comment via a spokeswoman. Asking rents in the building range from $55 per square foot to $65 per square foot, according to a JLL spokesman.

“The office building provides great city views in all directions and close proximity to mass transportation,” JLL’s Barbara Winter, who represented the landlord with colleague William Korchak, said in prepared remarks. “The fact that long-term tenants consistently prefer to renew their leases rather than relocate speaks to the quality and commitment of building ownership and management.”

Deka Immobilien acquired the property from SL Green Realty Corp. in October 2010 for $123.2 million, as CO reported at the time. The building is currently more than 96 percent occupied.

Recently, a few tenants signed renewals and new leases at the building. Kleinknecht Electric Co., an electrical equipment supplier, leased 4,904 square feet of space in the building for seven years to relocate from 252 West 37th Street. And United Parcel Service subsidiary Parcel Pro renewed its 3,118-square-foot offices on a portion of the third floor for five years.