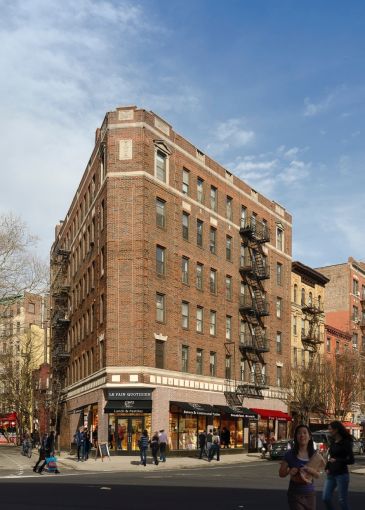 The international Belgian-inspired bakery Le Pain Quotidien, which brought back the communal table, has inked a 2,969-square-foot deal at 205 Bleecker Street in the West Village, Commercial Observer has learned.

The restaurant and bakery chain will occupy 1,524 square feet on the ground floor and 1,445 square feet on the lower level of the six-story, prewar building at the corner of Minetta Street, starting in late-fall 2016. Asking rent in the 10-year deal was $275 per square foot, according to a spokeswoman for co-landlord Infinity Real Estate. The eatery will be five blocks from New York University’s main campus near Washington Square Park.

Infinity and Seven Equity Group bought the retail condominium at the base of a residential building for $9.8 million in July 2015, CO reported at the time. Banana Republic and American Apparel previously occupied the building’s retail space. There is still 2,950 square feet of retail space available for lease, according to the Infinity spokeswoman.

“This West Village location is going to be a highly desirable corridor for restaurant operators,” David Berg, the director of investments for Infinity, said in prepared remarks. “It has proven to be a destination neighborhood that benefits from residents, students and tourists frequenting the West Village and Greenwich Village looking for a diverse dining experience.”

Ross Berkowitz, Brandon Berger and Hunter Rief of RKF represented the landlord, while Marc Frankel of Newmark Grubb Knight Frank represented the tenant. Frankel declined to comment via a spokeswoman. The RKF brokers didn’t immediately respond to a request for comment.

Le Pain Quotidien  focuses on the communal aspect of eating through its signature long tables. The eatery, which has 13 New York City locations, will break bread with neighbors like Joe’s Pizza, Dos Toros Taqueria and The Coffee Bean & Tea Leaf.