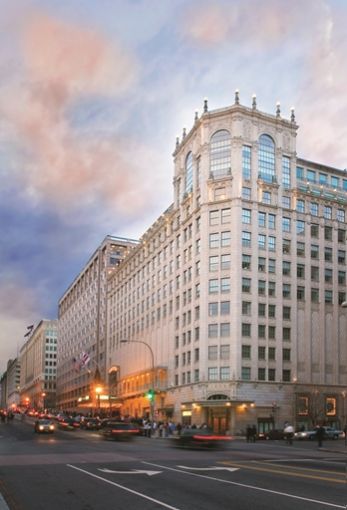 Vornado Realty Trust has refinanced the Time Warner Building at 1299 Pennsylvania Avenue NW in Washington, D.C., with a $273 million mortgage, the company announced in a press release on May 10.

While the release did not identify the lender, public records show that TIAA Global Asset Management (formerly TIAA-CREF) provided Vornado with the new debt. The financing carries a seven-year term that matures in June 2023, with a fixed rate of 3.65 percent. It is interest-only for the first two years and after, amortizes based on a 30-year schedule, according to this week’s press release.

Vornado owns a 55 percent stake in the 613,000-square-foot Time Warner Building, which is three blocks away from the White House. In 2010, Canada Pension Plan Investment Board purchased a 45 percent stake in the property, along with another of Vornado’s D.C. office buildings at 1101 17th Street NW, Commercial Real Estate Direct reported at the time.

In March of this year, Vornado refinanced another large office property—770 Broadway in Manhattan’s Noho. Morgan Stanley provided a $700 million mortgage on the 1,158,000-square-foot building. The debt carries a five-year term at Libor plus 1.75 percent, swapped for four and a half years to a fixed rate of 2.56 percent.

The real estate investment trust has a remaining $709 million in debt maturities this year, including $515 million in financing on the 4.2-million-square-foot Chicago office center Merchandise Mart, which matures in December, David Greenbaum, president of Vornado’s New York division, said on an earnings call last week.

In the D.C. metropolitan statistical area specifically, Vornado has been keeping busy. On last week’s earnings call, Mitchell Schear, president of the Vornado’s D.C. division, said, “In Washington, the story continues to be about recovery.”

The Time Warner building is currently 88 percent leased to “a great roster of high-quality tenants,” he said, including law firms Baker Boots and Cooley, as well as General Electric, Facebook, Hewlett-Packard and APCO Worldwide, he said. Retail tenants in the building include Au Bon Pain, Boss Shepherd’s, Potbelly Sandwich Works and Warner Theatre.

Mr. Schear noted that in 2015, the nation’s capital added 68,000 jobs, with similar estimates for 2016. In the first quarter of this year, Vornado completed 579,000 square feet of office and retail lease across 43 deals in the D.C. area. With the exception of One Skyline Tower at 5107 Leesburg Pike in Northern Virginia, Vornado’s office occupancy rate jumped 60 basis points to 90.6 percent.

Vornado is currently emptying offices at 1726 M Street and 1150 17th Street in Downtown D.C. to make way for a new 335,000-square-foot office building. Demolition is expected to start in the next three months, Mr. Schear said.

A representative for Vornado declined to comment. A spokesman for TIAA-CREF did not respond to multiple requests for comment.