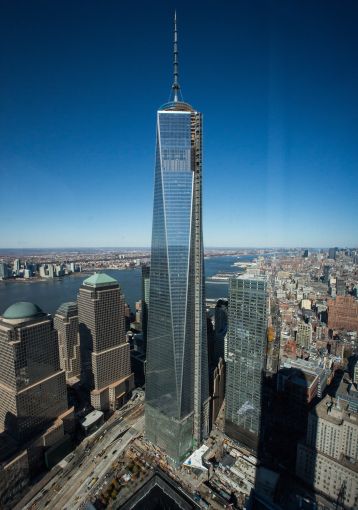 Three companies have signed deals to relocate or expand in 1 World Trade Center, for a total of 15,544 square feet, landlords Durst Organization and the Port Authority of New York & New Jersey recently announced.

In the largest transaction, financial startup Kensho Technologies has signed a five-year, 7,530-square-foot deal for built-to-suit offices on the 46th floor. It already relocated from its 3,510-square-foot space on the 45th floor in December. Michael Mathias of Savills Studley, who represented Kensho in the transaction, declined to comment via a spokeswoman.

The newest tenant coming to the building will be Global Risk Advisors, which signed a 10-year, 6,950-square-foot lease for built-to-suit space on the 83rd floor of the 1,776-foot-tall office tower. Zachary Price and Ramsey Feher of CBRE represented the financial services firm, which is relocating from its current offices at 845 Third Avenue between Second and Third Avenues.

And ITI Data, an information management solutions firm, is nearly tripling the size of its offices at 1 World Trade Center. The company has 2,556 square feet on the 46th floor and will now occupy 4,574 square feet on the 83rd floor after inking a new 10-year deal, bringing its total space to 7,130 square feet. The company extended the lease for its 46th floor space for 10 years as well. Paul Ferraro, Damla Yerdeleni and Deborah van der Heyden of JLL represented ITI Data.

“ITI Data has enjoyed the world-class views, amenities, access and address at 1 World Trade,” Mr. Ferraro said in a statement. “The Durst Organization went out of their way to find a solution for ITI’s expansion needs, which made for an easy decision to grow within the building.”

The landlords were represented in-house on all three transactions by Karen Kuznick of Durst Organization, and a Cushman & Wakefield team led by Tara Stacom.

“1 World Trade Center is continuing to demonstrate its appeal to forward-looking, TAMI [or technology, advertising, media and information services] firms,” Ms. Kuznick said in prepared remarks. “Employers are telling us that they value the Downtown location because of its ready access to a large, creative and technologically sophisticated workforce who live in the neighborhood or within easy commuting distance via the site’s dozen commuter and rail and subway lines.”