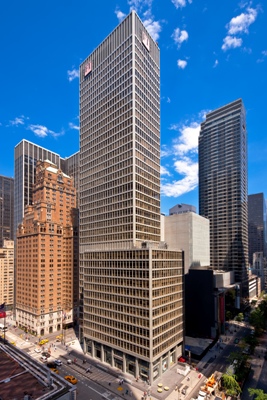 Silvercrest Asset Management Group has renewed its four-floor lease at RXR Realty’s 1330 Avenue of the Americas.

The company will remain in the 41,600 square feet it currently leases for another 11 years, according to a press release from Cushman & Wakefield, which represented the investment firm.

Silvercrest is located on the 37th through 40th floors of the 40-story tower between West 53rd and West 54th Streets, the release indicates. Asking rents on the upper floors of the property range from $130 to $140 per square foot, according to The New York Post, which first reported news of the deal.

Eric Reimer of C&W, who represented Silvercrest in the early renewal, said the company started out in the 534,000-square-foot building 14 years ago with a two-floor sublease.

“The firm’s headquarters now spans the top four floors of the tower and despite its robust presence, Silvercrest still prides itself on a collegial culture that has resulted in longstanding relationships with its clients,” Mr. Reimer said in prepared remarks.

“RXR was very excited to continue its relationship with Silvercrest for the next decade and beyond,” Mr. Edler said in a statement. “The brand and culture of their business is completely aligned with our values and the profile of the asset, and we are proud to say that their headquarters is located in the signature space of 1330 Avenue of the Americas.”

Last week, Commercial Observer reported that workspace provider Servcorp expanded its foothold by 3,760 square feet—giving it a total 10,200 square feet at the building.