The Plan: Compass at 90 Fifth Avenue 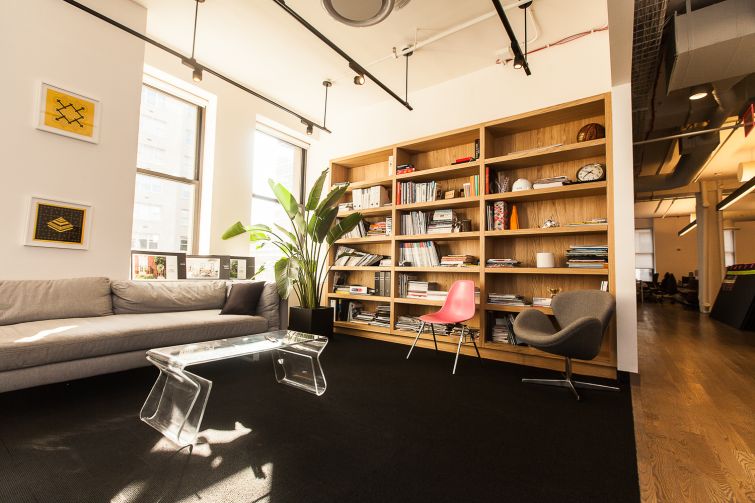 The fifth floor of Compass' office houses the app-based brokerages engineers, and has break out spaces for the tech workers (Photo: Emily Assiran/Commercial Observer).

In the world of VTS and WeWork, it’s tough to tell whether a company’s primary role is in technology or real estate. Sure, Compass is a company that sells and leases apartments, so it’s a brokerage, right?

But the fifth floor of its offices at RFR Realty’s 90 Fifth Avenue at the corner of West 14th Street is designated for the company’s engineers who build and maintain the two-year-old app-based brokerage’s activities. Compass signed its first lease at the building in July 2014 for 25,000 square feet for the third and fourth floors. In October 2014, the company signed a deal to expand to the fifth and sixth floors, and has since widened that all the way up to the ninth floor of the 11-story Midtown South building (Compass’ upper two floors are currently under construction).

The third and fourth floors, which house some of Compass’ brokers and others working on other facets of the business, give off the vibe that the company is another boutique Manhattan brokerage. The wraparound floor plate features polished concrete floors and wallpaper that plays on New York’s cityscape. Because most employees sit in an open bullpen, there are rooms on the perimeter for making a private phone call that usually hold two to three people. For those looking to meditate or lactate, there are rooms for that as well.

The layout changes when the elevator hits the fifth floor, however. That’s where the software engineers and other tech-related workers are based. For starters, the floors switch to hardwood, offering an old-school feel that tech companies have been pining for.

When you enter the fifth-floor lobby, there’s a bike rack and a lunch area with complimentary snacks to your right and a conference room featuring a Ping-Pong table to the left. The walls are painted solid in dark colors.

Such perks are designed to move employees onto different floors to interact with other departments.

“It forces people to move up,” said Jacqueline Barr, a principal of Ted Moudis Associates, which designed the space. “You’re one firm, but sometimes you don’t see people for a while. So there’s a reason behind doing that.”

Where the phone booths and meditation rooms are on two floors so far, on the fifth floor, there are collaborative alcoves. Those breakout spaces, which line the perimeter of the fifth floor and include couches and tables, were designed to ensure that Web developers could have spur-of-the-moment meetings.

“Those teams definitely operate in a very unique way,” said Adam Edrington, the operations manager for Compass. “They’re used to a very impromptu huddle up.”

Even the conference rooms have a more tech culture feel. Each one is named for a particular city—ones where Compass either has an office or aspires to set up shop. But the fifth-floor conference rooms are more about the abstract: they’re named after The Simpsons’ Springfield, Batman’s Gotham and Asgaard, home of The Avengers’ Thor.

Employees from across the company came together on naming the conference rooms, pitching potential names and voting on them.

“We democratized the process,” Mr. Edrington said. “We came up with the best fictional cities that would be appropriate.”