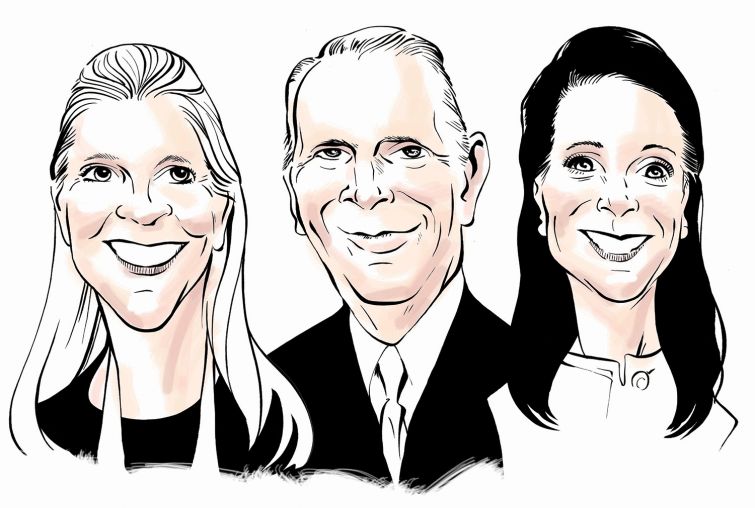 Darcy Stacom remembers getting the call. It came about a month or month-and-a-half ago and it was really unexpected.

“I wanted to call you and tell you what we’ve decided to do,” Ms. Stacom, a vice chairman and head of the investment properties group for CBRE’s New York office, recalls hearing.

John Banks, the president of the Real Estate Board of New York, was on the line.

He informed her that REBNY would be presenting the Bernard H. Mendik Lifetime Leadership in Real Estate Award to her family—including her; sister Tara Stacom, an executive vice chairman at Cushman & Wakefield; and their late-father Matthew Stacom, a vice chairman at C&W with a 67-year career at the firm.

The trio is receiving the award “for their exceptional accomplishments in the profession, leadership and service to the real estate industry over the course of their distinguished careers,” REBNY announced. This is the first time a family will be presented with an award at REBNY’s annual banquet on Jan. 21.

“We’re obviously so very proud, Darcy and I, to have carried on the reputation of the Stacom name in the business,” Tara said.

The three Stacoms were at Cushman & Wakefield together (even Darcy and Tara’s deceased mother worked as a broker for the company and other family members have been in the business), until 2002 when Darcy left for CBRE. She had been working in investment sales, unlike Tara and Matthew who were in office leasing, and felt it was time for an even bigger break from the clan.

“I didn’t feel at the time that Cushman had a great international network,” Darcy said. “And so when the opportunity came up to go to CB, which was not big locally but was big nationally and internationally, that sounded like a great idea. It was also a great opportunity—despite the fact that by that time I was on the board of Cushman & Wakefield, I was on the executive committee of the real estate board representing Cushman & Wakefield—it was still always this dad thing hanging out there. And it was bizarre given that I was already in my 40s. And I didn’t work for dad. I worked for dad for 18 months, maybe 20 and was gone. So it was just that ability to break free and create my own legacy.”

As for Tara, 57, she remained working with Matthew until he moved down to Florida about 15 years ago.

“I don’t think she ever had that same issue of wanting to break apart because they did do a lot of business together,” Darcy, 56, said.

For children of extremely successful and powerful people, especially those entering the same business as their elders, it can be challenging to distinguish oneself.

“Both Darcy and Tara have earned the respect of their colleagues and their clients by their own performance,” said Arthur Mirante, a principal and tri-state president of Avison Young who had a 41-year career at C&W, including as chief executive officer. He added: “It’s very rare to see children follow in their father’s footsteps and do even better.”

Tara is among C&W’s top-producing brokers. In more than 34 years, Tara has executed more than 40 million square feet in leasing, sales and corporate finance transactions. In 2011, she won REBNY’s Most Ingenious Deal of the Year Award for the leasing of 1 World Trade Center.

Darcy, called the “Queen of the Skyscrapers” by The Wall Street Journal in 1997, has ranked in the top three globally at CBRE for years. She arranged the $5.4 billion sale of Stuyvesant Town-Peter Cooper Village for Metropolitan Life in 2006 and five times received REBNY’s Most Ingenious Deal of the Year Award.

As women in a male-dominated field it was an even greater feat for the Stacom sisters to make their mark.

“Tara has been the No. 1 office leasing broker at Cushman & Wakefield,” Mr. Mirante said. “For a woman to do that is extraordinary. And Darcy did the same thing as a sales broker. How extraordinary is that in a male-dominated industry like this! What these two women have achieved, I think is really special. I think it’s great.”

A Stacom quality is being very direct and rising to the top. To excel, the brokers all have had to be tough and fierce competitors.

While Darcy and Tara specialize in different aspects of the business, they have had to face off over potential clients.

“We competed for the Bank of New York/1 Wall listing,” Darcy said. She beat out Tara and ended up selling 1 Wall Street to Macklowe Properties not that long ago. “When she’s competing in my space it’s harder for her because she’s leasing and she’s having to bring in a sales broker. I don’t compete for leases, period.”

Tara said of the rivalry: “Darcy is at the top of the game in sales, full stop. She’d have a tough time competing with me in leasing.”

Anybody who’s anybody in the real estate brokerage community knows the Stacom name.

“The Stacom name has become synonymous with iconic real estate and we know his legacy will continue through the great work of his family,” C&W said in a statement when Mr. Stacom died two years ago at the age of 95.

In 1962, Matthew negotiated the sale of two square blocks in downtown Chicago to Sears, Roebuck & Co., leading to the development of what would become North America’s tallest building (what is now the Willis Tower). In New York City he arranged Home Box Office’s lease at its 1100 Avenue of the Americas headquarters and L’Oreal at its 575 Fifth Avenue corporate offices, where both giants remain today.

But that name was a curse early on for the Stacom sisters.

“It was a tough thing. In those days, nepotism was considered the worst thing imaginable,” Tara said. “It was quite a stigma for Darcy and I. Now nepotism flourishes. In our day, nepotism was forbidden and especially being girls, it was really difficult establishing our own independence.”

At the same time, their father passed on some invaluable traits.

He instilled in them “curiosity about what else a building could be and how you could approach it differently,” Darcy said. She added: “Dad was a really tough task master about work.”

Tara offered: “Dad taught us early on to go out and reach out to people who would be best for the assignment and put the best team together.”

Also, Matthew passed down that the way to be confident in a pitch meeting is to be wholly prepared by thinking of every possible question—and answer—that could crop up. “Every meeting I do I go in that way,” Tara said.

The three brokers, who all graduated from Lehigh University, “have an incredible passion for the business, which makes you good in the business,” Tara said. “We all really thrive on being creative [and] strategizing in the business.”

As for the differences, Matthew was and Tara is “more traditional and conservative,” while Darcy “breaks with tradition and conventional standards,” Tara explained.

“I’m particularly delighted because we all know one of the great strengths of New York City real estate has always been the multi-generational families who have built this city,” Ms. Tighe said. “We associate always with the great families…that are on the supply side. What we don’t often think about are those on the demand side. The demand comes from the brokerage community. We create the focus of people on requiring space and the Stacoms have been one of the great families on the demand side of the equation.”

Ms. Tighe recalls meeting Matthew and Darcy when a young Ms. Tighe was contemplating entering the real estate business in 1984. The late real estate investor Seymour Durst of the Durst Organization arranged for Ms. Tighe to meet with Matthew.

“He was in his eyes one of if not the senior broker at the time,” Ms. Tighe recalled. “He thought Matt could give me insights.”

Ms. Tighe took the meeting with Matthew. She remembers him being gracious. Darcy was seated outside his office with her blonde hair in pigtails.

“He wanted me to meet Darcy so I could see that women can be brokers, too,” Ms. Tighe said. C&W didn’t hire Ms. Tighe at the time, and every time there would be a press clipping on a deal closed by Ms. Tighe, Matthew would cut it out and mail it to Ms. Tighe with a note that said: “What a mistake we made!”