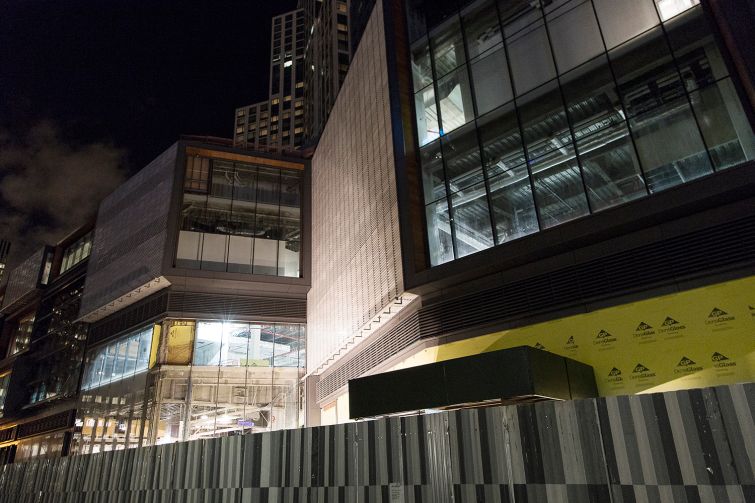 City Point might be under construction right now, but it will start opening this spring (Photo: Kaitlyn Flannagan/for Commercial Observer). tcullen2015

Mr. Conlon is referring to the passageway at City Point, the 1.7-million-square-foot mixed-use project in Downtown Brooklyn that will be one of the borough’s biggest new hubs for retail.

For the longest time, the old Albee Square Mall’s biggest claim to fame was inspiring the name of Brooklyn-bred rapper Biz Markie’s 1988 eponymous song. The retail building at an intersection of Flatbush Avenue, Willoughby Street, Gold Street and Fulton Street in the heart of Downtown Brooklyn never seemed to have hit the mark and went through a slew of owners over more than a decade.

Now, the plot of land that once housed the since-demolished mall is home to City Point, the massive, full-block retail complex that will house Target, Century 21 and Alamo Drafthouse Cinemas.

The developers—a partnership between Acadia Realty Trust and Washington Square Partners—also wanted to use the site to link Fulton Street and Flatbush Avenue. Dubbed the “Prince Street Passage,” the interior pedestrian corridor is accessible to the public. Both sides of the passageway will be hugged by retail when it opens next fall, the last piece of City Point’s puzzle.

Brokers working in the area got a tour of the work last week, and Commercial Observer took a sneak peek of what the passageway will look like. There’s still lots of work to be done (sheetrock is being hung now), but the completed product will include polished concrete floors and repurposed wood sourced from old Brooklyn factories on the ceiling.

The idea here is to ensure one of City Point’s multiple entrances isn’t the focal point, Mr. Conlon added. Instead, the developers want the doorways on Fulton and Gold Streets, as well as on Flatbush Avenue, all to connect and be the main entrance.

“It mimics an older European arcade that you would go street-to-street with,” said Paul Travis, the managing partner at Washington Square. “It’s a space that people live and work in the area want to use. [It’s] just a really different place than where we started six or seven years [ago].”

The venture is linking two streets that currently intersect further down in Downtown Brooklyn. The development will eventually neighbor massive commercial and residential developments by JDS and JEMB Realty.

“If you look at a map of where City Point is relative to the other developments, we happen to be in the geographic bull’s-eye of all the residential and commercial development around us,” Mr. Conlon said. “So when we open, we’re going to be that commercial hub that’s going to meet the demand of the live-work-play environment that’s being created here.”

We’ll start to see the name-brand retailers at the shopping complex opening up this year. Century 21 is due to open in April; Alamo will start playing movies in June; and lastly Target and Trader Joe’s will open in July. The below ground DeKalb Market Hall will open sometime between August and September, as will the ground-floor retail.

But the space won’t play host to the Subways and Taco Bells of the world; Mr. Conlon said there will be national and international retailers in the Prince Street Passageway, but the retail will be smaller shops. It’s going to be a mix of Soho, 34th Street and the Upper East Side, he added.

The venture wants to sign urbanized incarnations of brands that have a strong client base, in order to fit Brooklyn’s authenticity factor. (Think how Target has done a compact CityTarget and Whole Foods has its 365 line.)

“This is our signature piece of our project,” Mr. Conlon said. “I don’t want it to be an orderly, uniform expression. This is Brooklyn. Let’s let this be Brooklyn. This wants to be an eclectic, chaotic collection of food and sights and sounds and retail and entertainment.”