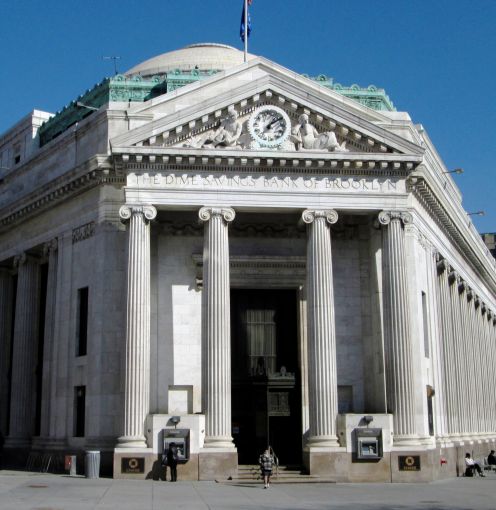 The original headquarters of Dime Savings Bank at 9 DeKalb Avenue.

So far December has been a fruitful month for Joseph Chetrit and his family and friends.

In the past week, the Chetrit Group and its various joint venture partners closed $185 million in debt across two projects, Commercial Observer has learned.

Iron Hound Management Company brokered both transactions, which include a $115 million loan from Fortress Investment Group for a development in downtown Brooklyn and a $70 million loan from SL Green Realty Corp. on a row of empty retail shops on West 34th Street.

“It’s been a busy week for Iron Hound,” said Robert Verrone, a principal at the New York-based based advisory firm who helped arrange the two deals.

The Chetrit Group and Michael Stern’s JDS Development Group are using the $115 million floating-rate loan from Fortress to refinance existing debt on the landmarked Dime Savings Bank of New York building at 9 DeKalb Avenue and fund the acquisition of an adjacent site at 340 Flatbush Avenue Extension.

It was not immediately clear how much debt remains on the landmarked bank site, but Bank of America provided a $7.5 million refinancing on the property in May 2007, city records show. Less than a year later, J.P. Morgan Chase acquired the property and its outstanding debt.

The Chetrit Group and JDS later struck a deal to buy the former bank property from J.P. Morgan for $90 million and plan on using its air rights to construct a residential tower on the neighboring site that the two development firms also own, as Crain’s New York Business previously reported. The joint venture partners then bought the site at 340 Flatbush Avenue Extension for $43 million in May 2014.

While the former bank could be converted into a retail space or a lobby for the adjacent building, the new residential tower is reportedly going to rise between 1,000 and 1,200 feet.

As for Chetrit’s latest development in Midtown Manhattan, the firm originally acquired a total of seven parcels from 245-261 West 34th Street in partnership with Cornell Realty Management in two separate transactions for a total of $31.5 million from discount retailer Conway Stores in January 2014.

The two firms are no longer developing the sites together and split the assets, Mr. Verrone of Iron Hound confirmed. Chetrit is using the proceeds of the loan to fund the predevelopment of 251-257 West 34th Street. The vacant retail stores will be demolished and replaced with a mixed-use retail and hotel project.

The two recent debt deals are part of a wave of financings the Chetrit Group has closed this month. On Dec. 7, the family-run real estate dynasty landed an $11 million construction loan from Puerto Rico-based Popular Community Bank to develop a multifamily rental building at 150-01 88th Avenue in Jamaica, Queens. Just across the street, the development firm is constructing a massive multifamily complex on the site of a former hospital.

This past summer, Chetrit and Clipper Equities took out a $345 million financing package—a $280 million senior loan led by Natixis Real Estate Capital and $65.5 million mezzanine loan from Apollo Commercial Real Estate Finance—for a condominium conversion in Gramercy Park. Chetrit is also working on a condo conversion of the Sony Building in Midtown.